Grays (or Grays Thurrock) is the largest town in the borough and unitary authority of Thurrock in Essex and one of the Thurrock's traditional (Church of England) parishes. The town is approximately 20 miles (32 km) to the east of London on the north bank of the River Thames, and 2 miles (3.2 km) east of the M25 motorway. Its economy is linked to Port of London industries, its own offices, retail and Lakeside, West Thurrock. Its diversely used riverside faces Broadness Lighthouse, Broadness Point, Swanscombe, Kent.

Samuel Pepys recorded in his diary that he visited Grays on 24 September 1665 and apparently bought fish from the local fishermen. Parts of Grays and Chafford Hundred are set within three Victorian chalk pits; the largest two being the Lion Gorge, and the Warren Gorge. Another area of the Chafford Hundred residential development is built on a Victorian landfill site.

Thurrock is a Saxon name meaning "the bottom of a ship". The element "Grays" comes from Henry de Grai, a descendant of the Norman knight Anchetil de Greye, who was granted the manor of Grays Thurrock in 1195 by Richard I. 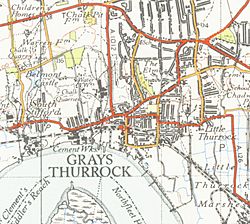 Local sites of interest include the Thameside Theatre, the Thurrock History Museum, Grays Beach and the now-disused State Cinema.

From the top of the Derby Road Bridge in Grays one can look down to Thurrock Yacht Club, Grays Beach children's playground and the River Thames.

As well as Thurrock Yacht Club, Grays Beach is the site of the local landmark The Gull, a lightship built in 1860, which has lain on the foreshore for decades and is now in a serious state of dilapidation.

The Thurrock Campus of South Essex College relocated to a new complex in the town centre in September 2014.

The town is approximately 20 miles (32 km) to the east of London on the north bank of the River Thames, and 2 miles (3.2 km) east of the M25 motorway its economy is linked to Port of London industries, its own offices, retail and Lakeside, West Thurrock. Its variously used riverside (from homes through wild bird-habitat marshland to importation, storage and distribution) faces Broadness Lighthouse, Broadness Point, Swanscombe, Kent.

Grays has good road links, being close to the A13 road and the M25 motorway. The A126 London Road is the main road which links Grays town centre with Lakeside Shopping Centre, Purfleet and Tilbury.

Grays railway station runs through the centre of the built-up core and is served by c2c and runs between Fenchurch Street station in the City of London to the west and Shoeburyness to the east.

Also Grays bus station by the station above is a hub for most bus services in Thurrock. The bus services are operated by Ensignbus, First Essex, Arriva Southend, Imperial Buses and Regal Busways.

All content from Kiddle encyclopedia articles (including the article images and facts) can be freely used under Attribution-ShareAlike license, unless stated otherwise. Cite this article:
Grays Facts for Kids. Kiddle Encyclopedia.