Hammondsport is a village in Steuben County, New York, United States. The population was 731 at the 2000 census.

The Village of Hammondsport is in the Town of Urbana and is northeast of Bath, New York.

Lazarus Hammond founded the village around 1827. The village was incorporated in 1856. The village later became a center for the New York wine industry.

The American motorcycle designer and manufacturer, and recognized expert on gasoline engines Glenn Hammond Curtiss resided at Hammondsport, where he was born in 1878. Early development of aircraft and seaplanes was carried out at Hammondsport by Curtiss who had joined with Alexander Graham Bell and others in the Aerial Experiment Association.

In 1921, five local men purchased a wood barrel factory just south of the present D.W. Putnam Wine Company, and named it the Aerial Service Corporation. Two of these men, Henry Kleckler, the president and William Chadeayne, vice president, were formerly with the Curtiss Aeroplane Company, founded by Curtiss. Today, this company is known as the Mercury Corporation.

Keuka Inlet and Glen Brook flow past the village.

There were 332 households of which 27.1% had children under the age of 18 living with them, 44.3% were married couples living together, 13.3% had a female householder with no husband present, and 39.5% were non-families. 34.6% of all households were made up of individuals and 14.8% had someone living alone who was 65 years of age or older. The average household size was 2.20 and the average family size was 2.83. 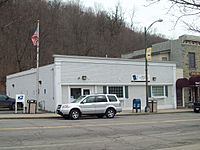 One of Hammondsport's current wineries, the Pleasant Valley Wine Company, founded in 1860 and a mile southwest, was designated U.S. Bonded Winery No.1 and has eight remarkable stone buildings listed on the National Register of Historic Places.

The Great Western Winery and Visitor Center, the most comprehensive center of its kind in the world, is part of the same facilities. Displayed there are historical artifacts covering over 140 years of Finger Lakes winemaking and grape growing expertise, a working model of the Bath and Hammondsport Railroad, "The Champagne Trail" and the cooper's shop, showing authentic wine casks and barrels, cooper tools and equipment.

The village is referred to as "The Cradle of Aviation" and is home to The Glenn H. Curtiss Museum, dedicated to the memory of the pioneer aviator and housing such exhibits as a full-scale replica of the first naval aircraft and many original planes and developed by Curtiss.

The modern-day Mercury Corporation is a privately held company having 1,500,000 sq ft (140,000 m2) of manufacturing facilities in New York, subsidiaries in Florida, North Carolina, Minnesota and Mexico, as well as alliance partnerships in Europe and Asia. It is one of the leading corporations involved in contract manufacturing, sheet metal fabrication and assembly, and plastic injection molding.

The village was served by the Bath & Hammondsport Railroad for many years. Although the tracks are still in place, railroad service has been discontinued.

Hammondsport is along the route of the Finger Lakes Trail, a scenic trail winding across central and western New York.

Much of the 1995 mockumentary Dadetown was filmed in and around Hammondsport.

All content from Kiddle encyclopedia articles (including the article images and facts) can be freely used under Attribution-ShareAlike license, unless stated otherwise. Cite this article:
Hammondsport, New York Facts for Kids. Kiddle Encyclopedia.