Harrietstown is a town in Franklin County, New York, United States. The total population was 5,709 at the 2010 census, of whom 3,879 lived in the village of Saranac Lake on the eastern side of the town.

Harrietstown is in the southeastern corner of Franklin County and is south of the town of Brighton.

The area around Saranac Lake was first settled around 1819. Harrietstown was formed from the town of Duane in 1841. At the end of the 19th century it became the location for sanatoria for the treatment of lung diseases, taking advantage of the clear mountain air.

By 1900, the area became a tourist area, assisted by the winter carnivals begun in 1898.

Communities and locations in Harrietstown 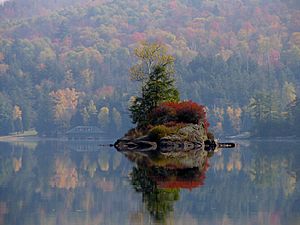 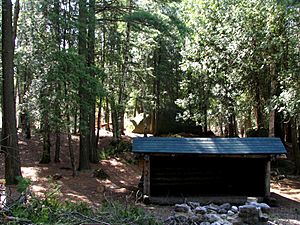 A lean-to at a campsite on Middle Saranac Lake

All content from Kiddle encyclopedia articles (including the article images and facts) can be freely used under Attribution-ShareAlike license, unless stated otherwise. Cite this article:
Harrietstown, New York Facts for Kids. Kiddle Encyclopedia.