Haxby is a town and civil parish in the unitary authority of City of York, on the River Foss, five miles (8 km) north of York and south of Strensall, in North Yorkshire, England.

Haxby is bordered on the east by the River Foss, and to the west by the village of Wigginton, whose expansion has caused the two settlements to form a continuous urban environment. To the south is the garden village of New Earswick and the York Outer Ring Road (A1237) with the open farmland to the north as far as the villages of Sutton-on-the-Forest and Strensall.

"Haxby" is a Norse place-name and translates as "Farmstead or village of a man called Hákr". It is formed from a Norse personal name and the Old Scandinavian word bý, meaning "farmstead, village or settlement". Haxby was recorded as Haxebi in the Domesday Book of 1086. The town is primarily a dormitory for commuters to nearby towns and cities, though local service industries provide employment opportunities.

The town was historically part of the North Riding of Yorkshire until 1974. It was then a part of the district of Ryedale in North Yorkshire from 1974 until 1996. Since 1996 it has been part of the City of York unitary authority. The centre of the town was made a Conservation Area by the local council in 1976.

A settlement on the site of the modern town named by the Vikings as Haxebi was established around the 9th century. The Norse word "BY" meant a township or farm and was usually appended to the name of the holder of the lands, in this case a man called Hakr. A Grade III listed Viking cross base in the churchyard of St Mary's Church, and the discovery of a Viking cross shaft in a nearby garden in 1978 support this date. There is evidence of Roman occupation with the 1966 discovery of a site of a Roman villa on Haxby Moor. Roman pottery was found in 2003 on Station Road along with a silver Roman signet ring.

In the Middle Ages, because the village was in the royal Forest of Galtres, its inhabitants were subject to forest law and took part in the occasional courts that devised and enforced it. Charles I divested himself of the forest in 1629 and the village acquired the land to increase its size, resulting in the parish of some 2,100 acres (8.5 km2) of today. Haxby was not a separate parish. Initially it was divided between the parishes of Strensall and Driffield. Once St Mary's Church was built in the 16th century it became a chapelry to the parish of Strensall and in 1862 became a parish in its own right.

Much of the current town centre is 18th and early 19th century architecture but significant redevelopment took place in Victorian times of which the Memorial Hall (formerly the Board School), now housing a local community radio station Vale Radio, the present St Mary’s Church and the Methodist Chapel are all important buildings. It was at this time, with the arrival of the railway in Haxby, that the village became a popular place to live and commute from. Growth continued gradually throughout the first half of the 20th century until the population explosion in the 1970s quadrupled the population. In 1976, the local authority took the very important step of designating the centre of Haxby as a conservation area. By 1992 Haxby had outgrown its image of a rural village and was declared a town, by which time its population had grown to be over 10,000. At the same time, a national revision of boundaries moved Haxby from Ryedale District Council to be part of York Unitary Authority and this new authority adopted the boundaries and conditions of the conservation area. 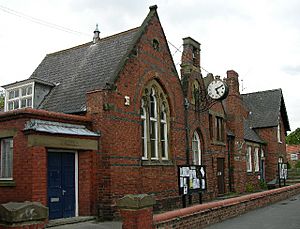 The town sits on flat ground consisting mostly of clay with soil that is sand and alluvium, near the old Forest of Galtres. To the north is a small tributary of the River Foss called Golland Dike, and to the east is the River Foss which flows southward. The nearby village of Wigginton now merges with Haxby though the old Parish Boundary map still shows the dividing line. This runs east to west along the back of the houses on Wheatfield Drive on its southern edge as far as Barley Drive. Here it turns northward cutting across Greenshaw Drive until it reaches the road known The Village. The boundary follows this road until it turns west. The boundary at this point continues northward cutting across Windsor Drive near Ripley Grove and then out into the countryside.

As of October 2012 First transport group operate two bus services in the town as part of the Chapelfields to Wigginton and the Copmanthorpe to Haxby routes. Transdev operate the Askham Bar to Monks Cross bus services which stops in the town.

These bus services are:

Between 1845 and 1930, Haxby was served by a railway station on the York to Scarborough Line. A new station is due to be built and operational by 2013, but the plans were put on hold in June 2010 until the amount of public money necessary for the works can be clarified. 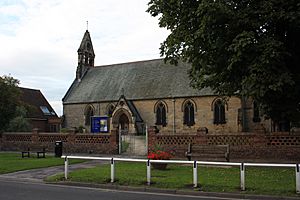 St Mary's Church was rebuilt in 1878 on the site of the former 16th century building with Parish Registers dating back to 1678 and is located on the road known as The Village near the centre of the town. In the 19th century there was both a Wesleyan Methodist Chapel and a Primitive Methodist Chapel. As of 2010 only the Wesleyan Chapel remains as home to Haxby & Wigginton Methodist Church on the road known as The Village opposite Sandy Lane.

The town is within the catchment area of Joseph Rowntree Secondary School.

Haxby United Football Club play at the Ethel Ward Playing Fields. As of 2013, the 1st XI play in the York League Division 2, having won the Premier League title in the 2009/10 season. The 2nd XI play in the Reserve Division A.

All content from Kiddle encyclopedia articles (including the article images and facts) can be freely used under Attribution-ShareAlike license, unless stated otherwise. Cite this article:
Haxby Facts for Kids. Kiddle Encyclopedia.