Hico (/ˈhaɪkoʊ/, HY-koh) is a small city located in Hamilton County in Central Texas. The population was 1,379 at the 2010 census. The town motto is "Where Everybody Is Somebody!"

Named for its founder's unincorporated hometown in Calloway County in southwestern Kentucky near Murray, just north of the Tennessee state boundary, Hico's original location was on Honey Creek. When the Texas Central line (part of the historic Katy Railroad) was built nearby, the citizens moved 2.5 miles to the rail line. Hico was incorporated in 1883 and became the Hamilton County shipping center. Over the years, it became a cattle and cotton market. Today, ranching and tourism dominate the local economy.

In 1903, Kentucky-based evangelist Mordecai Ham held the first of his seventy-five Texas revival meetings in Hico. There were 150 professions of faith in Jesus Christ.

Ollie P. Roberts, usually known as Ollie L. Roberts, "Brushy Bill" Roberts, or William Henry Roberts, a resident of Hico during the late 1940s, claimed to have been the outlaw Billy The Kid. Although his assertion has been discredited by historians, Hico has capitalized on his infamy by opening a small Billy The Kid Museum, where visitors can decide whether Brushy Bill was indeed William H. Bonney. Brushy Bill claimed to have been born in Buffalo Gap south of Abilene, Texas. The museum offers a taped video presentation of FOX NEWS, narrating an documentary about Brushy Bill's claim. There is also a replica of a 19th-century jail in the museum and other artifacts of the period.

A marker devoted to Brushy Bill is located on Pecan Street in downtown Hico. "Ollie L. 'Brushy Bill' Roberts, alias Billy the Kid, died in Hico, Texas on December 27, 1950. He spent the last days of his life trying to prove to the world his true identity and obtain the pardon promised him by the governor of the state of New Mexico (Lew Wallace). We believe his story and pray to God for the forgiveness he solemnly asked for [sic]." The NBC television series Unsolved Mysteries did a segment on "Brushy Bill" Roberts claim. That show also raised the possibility that history could be wrong. 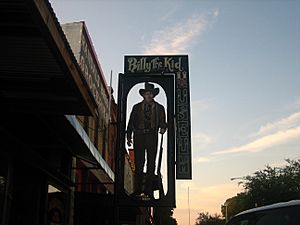 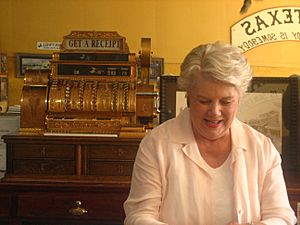 According to Jan Canup , several relatives, including a son and grandson, of former Sheriff Patrick F. Garrett claim that their kinsman never killed Billy The Kid. There were no reliable witnesses to what body was actually placed in the Kid's grave, according to this line of argument. The Garrett family contends that Sheriff Garrett and Billy the Kid may have even plotted to collect the $500 reward offered for the capture of the outlaw. Roberts' grave has not been revealed, thus preventing DNA authentication of the remains.

Next to the Brushy Bill marker on North Pecan Street, is a large statue by the sculptor James Rice of Billy the Kid firing his gun. Downtown Hico, focused upon the Billy the Kid Museum on South Pecan Street, is a restored Western community with businesses appealing to tourists. There are antique stores, gift shops, a drink shop, restaurants, and a gourmet popcorn shop.

Each July Hico hosts Old Settlers Reunion at City Park. During the week the "Citizen of the Year" is recognized. Hico High School, which maintains a popular football team under Coach Keith Wood, holds its homecoming observance at the same time as Old Settlers Day. Hico claims that its Old Settlers gathering, which dates to 1882, is the oldest of its kind in Texas. It has been held each year since 1882, except during World War II.

Hico has maintained a post office since 1861, and the first mail was carried by horseback. An early Hico business was Hico Ice and Cold Storage, which began in 1905. In time, it developed a major shipping market for eggs, chickens, and turkeys. The weekly newspaper, released on Thursdays, is the Hico News Review, edited and published by Jerry E. McAdams (born 1951). The publication is a Texas Press Association Award winner.

Across Highway 281 from the Hico News Review is the First Baptist Church, one of several congregations in the community. The historic First United Methodist Church, also on Highway 281, was organized in 1881, with some twenty-five charter members. Six area churches later merged to become the Hico Methodist body. The current yellow brick sanctuary dates to 1903. The church is known for it support of both Boy Scouts and Girls Scouts.

Ranch life, including horseback riding, hayrides, and camping, can be experienced at Timber Creek Ranch some ten miles southeast of Hico on Texas Highway 6.

Hico also hosts the Annual Texas Steak Cookoff in May. It boasts thousands of guests every year.

According to the United States Census Bureau, the city has a total area of 1.5 square miles (3.9 km2), all land.

Approximately 1.8 miles north of Hico are what appear to be the remains of an impact crater that was formed some time after the Cretaceous Period.

There were 556 households out of which 30.8% had children under the age of 18 living with them, 51.4% were married couples living together, 10.6% had a female householder with no husband present, and 34.7% were non-families. 31.5% of all households were made up of individuals and 22.3% had someone living alone who was 65 years of age or older. The average household size was 2.37 and the average family size was 2.99.

The climate in this area is characterized by hot, humid summers and generally mild to cool winters. According to the Köppen Climate Classification system, Hico has a humid subtropical climate, abbreviated "Cfa" on climate maps.

All content from Kiddle encyclopedia articles (including the article images and facts) can be freely used under Attribution-ShareAlike license, unless stated otherwise. Cite this article:
Hico, Texas Facts for Kids. Kiddle Encyclopedia.