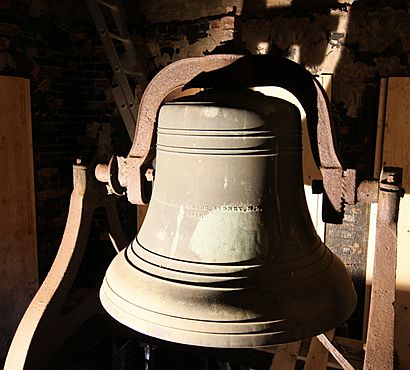 The bronze Tenor Bell in the Highland Arts Theatre Chime. This is the heaviest bell at 2,050 lb (930 kg) and is mounted in a rotary iron yoke on iron stands above the main chime frame in the bell chamber.

Work was commenced on the new church building on Bentinck Street on April 14, 1910. The cornerstone was laid by Mrs. Farquharson, widow of the second minister, on the 29th day of June.

As the old church had only a bell, it was decided by the members, that they would like to have chimes in the new church, so on January 18, 1910, before the new building had been started, a number of young ladies of St. Andrew's met at the home of Mrs. A. N. Maclennan, for the purpose of organizing a sewing league to raise money for the chimes. The group was organized under the name of "The Chimes Club." The Club met every Tuesday evening, the dues were 10c per month.

The sum of $225.46 was raised by these ladies by the end of the first year, by a sale of hand work, and two socials, at which admission was charged. The contract price of the chimes was $3,500.00. 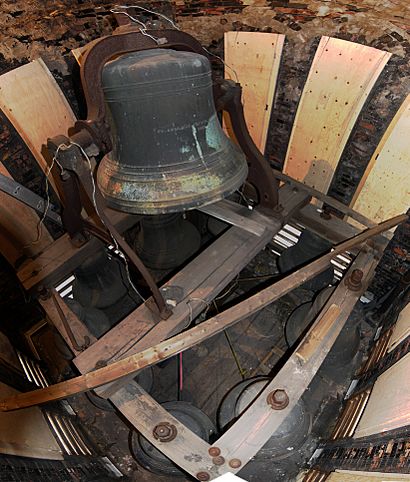 This is a wide angle image of the ten bells that make up the Highland Arts Theatre Chime. There is considerable distortion, especially of the Tenor Bell mounted on the top of the chimeframe, due to the wide angle nature of the photograph.

The bells were cast in bronze (bell metal) for St. Andrew's Church by the McShane Bell Foundry in Baltimore, Maryland, USA and are dated 1911. The chime first rang out in a series of concerts on June 24, 25, 26, 1911 in conjunction with the opening and dedication of the church itself. The special chimer for the occasion was Prof. J. W. Mettee, representing the founders - The McShane Bell Co.

The bells are arranged as a traditional chime of 10 bells and are played from the ringing room immediately below the Bell Chamber in the bell tower using the original unmodified McShane "pump handle" chimestand with deep key-fall on all notes. Nine of the bells are hung fixed in position in the main chime frame in the belfry, the tenth, the heaviest bell, is mounted in a rotary iron yoke on iron stands above the main chime frame. This bell, the tenor bell, is equipped with both a spring clapper and a tolling hammer so can be played either by swing chiming or by using the chimestand.

All the bells have the foundry's name cast onto their waist. The nine smaller bells are also decorated with inscriptions, quotes from Psalms from the King James Version of the Bible, cast onto their waist, while the largest bell's inscription reads "St. Andrews Church, Sydney NS". This largest bell weighs about 2,050 lb (930 kg) and its pitch is E in the middle octave. The chime is attuned to concert pitch, to the eight notes of the octave or diatonic scale with two bells added, one bell a semitone, a flat seventh, and one bell, the treble bell, above the octave. This smallest bell, at about 500 lb (230 kg), rings an F♯.

In December 2015 a video posted on Facebook of Sydney native Glenda Watt playing the Christmas carol "Angels We Have Heard on High" on the chime was viewed more than 1.6 million times within the first nine days of it being uploaded to the social networking site.

Follow this link to a page of videos of the chime being played: The Chimes ~ Christmas Music

The bells and their inscriptions

All content from Kiddle encyclopedia articles (including the article images and facts) can be freely used under Attribution-ShareAlike license, unless stated otherwise. Cite this article:
Highland Arts Theatre Chime Facts for Kids. Kiddle Encyclopedia.