Hoyerswerda (Upper Sorbian: Wojerecy, Lower Sorbian: Wórjejce) is a city in the north of the Saxonian Upper Lusatia, lying 35 km (21.7 mi) north east of Cottbus and 54 km (33.6 mi) from Dresden, (Saxony). It is in the Sorbian settlement area. The city is one of the six centers of the Free State of Saxony and is a member of the Euroregion Neisse, a group which helps international trade and cooperation in the area.

The first time Hoyerswerda was mentioned in a document was in 1268. In the year 1371 the emperor Karl IV. made it a market place. The people were allowed to choose their own council . This right was given to them by Baron von Duba. In the year 1705 the Elector of Saxony August the Strong gave Hoyerswerda to Katharina of Teschen. She was an important person in the small town. She helped the town to develop its trade and handicraft.

In 1759, during the Seven-Years War between Prussia and Saxony, there was a fight between Austrian and Prussian troops which is called: the Battle of Hoyerswerda.

After the Congress of Vienna in the year 1815 Hoyerswerda was given to Prussia. In 1825 it became part of Selesia. In 1873 the railway came to Hoyerswerda – opening up access to other parts of the country. This brought economic prosperity. A large repair workshop was built. In 1912 the Sorbians formed an organization called "Domowina" in Hoyerswerda. In the year 1945 a lot of Hoyerswerda was destroyed because it was a military stronghold of the German army. The invading troops of the Red Army set parts of the city on fire.

In 1955 the brown coal industry developed close to the city. Today this industry is partly in Brandenburg. Houses were built here for the families of the people working in the industry. From 1957 the need of for housing increased even more. The first large blocks of flats were built. Altogether ten residential complexes were built creating housing for tens of thousands of people. In the year 1981 the number of inhabitants of the city reached its maximum of 71.124. At this time Hoyerswerda had the highest birth rate in the GDR. In 1990 the former Prussian province of Lower Saxony decided by popular vote to go over to the Free State Saxony.

In 1991 rioting took place in Hoyerswerda outside a hostel for foreign asylum-seekers. People used the word Ausländerfrei (foreigner-free). This word was voted the Unwort (politically incorrect word) of 1991. 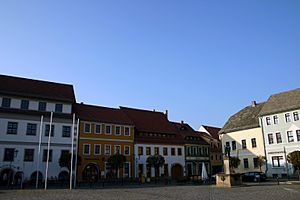 Market place in the old town

Since the fall of the Iron Curtain many people have left the town. Since the number of inhabitants continued to decrease after 1999, many iron buildings were pulled down. From 1 January 2008 Hoyerswerda will no longer be able to rule itself as there will be changes to the administration of Saxony, and Hoyerswerda will become part of a district (Kreis) instead of being a kreisfreie Stadt.

All content from Kiddle encyclopedia articles (including the article images and facts) can be freely used under Attribution-ShareAlike license, unless stated otherwise. Cite this article:
Hoyerswerda Facts for Kids. Kiddle Encyclopedia.