Huntington is a village and civil parish in the unitary authority of City of York in North Yorkshire, England. It is part of the Huntington & New Earswick ward and lies on the River Foss, to the north of York and the south of Strensall. Before 1996 it was part of the Ryedale district of North Yorkshire.

Huntington is made up of mainly low-lying land, with the highest point in the village being only 64 feet above sea level. It covers some 4,800 acres (19 km2) and measures some 4 miles (6 km) from north to south and 3 miles (5 km) east to west.

There has been a parish church (All Saints') in this village since 1086. Huntington originally included three villages within the parish boundaries: Towthorpe, Earswick and Huntington. Huntington itself also comprised the small township of West Huntington, including West Huntington Hall. The village is somewhat unusual in that the main settlement and church are separated by a river, the Foss. During the Middle Ages, the part of Huntington to the east of the Foss was part of the Forest of Galtres, a hunting royal forest that covered large areas of land to the north-east of York and is still referred to in many local place names. The Act of Dis-Afforestation of 1629 put an end to this.

Huntington remained a very small settlement until the second half of the 19th century, with no more than approximately 630 inhabitants by 1901. The expansion of Huntington started slowly around 1870–1880, with the construction of nearby New Earswick and the opening of Queen Elizabeth Barracks in nearby Strensall. The rehousing schemes during the 1930s speeded up the growth of the village and turned Huntington into a suburban area of the York. The village suffered only a little damage during the Second World War and saw a further housing expansion along Huntington and Strensall Road in the post-war years. The northwards expansion was halted by the construction of the York ring road. Most of the land associated with West Huntington has now become the separate parish of New Earswick. Huntington's old village, including All Saints' Church and the nearby West Huntington Hall, was made a conservation area in 1991. The urbanisation of the village is now almost complete, and current housing development is mainly driven by evolutions in the UK property market, the shortage of housing in York and the attraction of the local secondary school, Huntington School.

Huntington was served by Earswick railway station on the York to Beverley Line between 1847 and 1965. 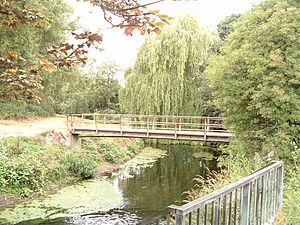 The River Foss at Huntington

All Saints' Church is set in the countryside between Huntington and New Earswick. Its location is on Church Lane, off the Old Village in Huntington. It sits beside the River Foss which runs between the two villages. It is a popular location for life ceremonies, especially weddings and baptisms ('christenings' ) and has an attractive and well-maintained churchyard. There is a large car park nearby which is in constant use all week by Huntington residents (for walks along the river, exercising dogs, horses, etc.).

St. Andrew's Church is home to a lively Christian community whose building sits on Huntington Road, near the Link Road which connects Huntington to New Earswick. It is close to Huntington Secondary School and is just opposite the New Earswick bowls club and the 'Flag & Whistle' pub. The building includes a hall used for numerous youth and community groups during the week as well as the Ladybirds Nursery School and a school of dance. There is also large scout hut to the rear and together with an active church community the site is in use 7 days a week including most evenings. The church has recently been refurbished in order to serve the community better, including creating a new kitchen, office space and improved access to the hall and church buildings.

All content from Kiddle encyclopedia articles (including the article images and facts) can be freely used under Attribution-ShareAlike license, unless stated otherwise. Cite this article:
Huntington, City of York Facts for Kids. Kiddle Encyclopedia.