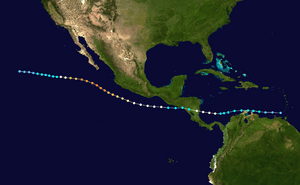 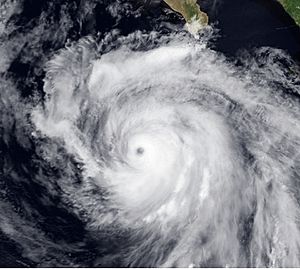 The start of this storm goes back to a tropical wave near Dakar, Senegal. It crossed the Atlantic and did not start until it was close to the Windward Islands. On July 24 it became Tropical Depression Three. Tropical Depression Three became Tropical Storm Cesar on July 25. Cesar did not strengthen much because it was close to land. It did start to strengthen more as it entered the Southwestern Caribbean Sea. After about half way between Nicaragua and South America, Tropical Storm Cesar became a hurricane on July 27. Hurricane Cesar reached its highest winds on July 28, which were at 85 mph. Later that day, Hurricane Cesar made landfall near Bluefields, in Nicaragua while it still had its highest winds. Cesar weakened into a tropical storm over Central America. But it did survive crossing Central America.

All content from Kiddle encyclopedia articles (including the article images and facts) can be freely used under Attribution-ShareAlike license, unless stated otherwise. Cite this article:
Hurricane Cesar-Douglas Facts for Kids. Kiddle Encyclopedia.