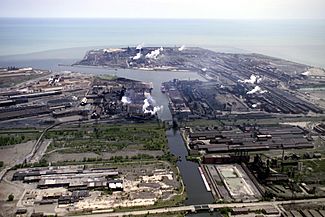 The canal and harbor were built over several years beginning in 1901. On March 26, 1901, Inland Steel Company accepted an offer from the Lake Michigan Land Company of 50 acres (200,000 m²) (20 hectares) of free land along with a promise of construction of a harbor and railroad. For its part, Inland Steel agreed to construct a steel mill there that would cost no less than one million dollars. The shortline railway connecting this area to other rail lines is still known as the Indiana Harbor Belt Railroad.

All content from Kiddle encyclopedia articles (including the article images and facts) can be freely used under Attribution-ShareAlike license, unless stated otherwise. Cite this article:
Indiana Harbor and Ship Canal Facts for Kids. Kiddle Encyclopedia.