The Grand Calumet River is a 13.0-mile-long (20.9 km) river that flows primarily into Lake Michigan. Originating in Miller Beach in Gary, it flows through the cities of Gary, East Chicago and Hammond, as well as Calumet City and Burnham on the Illinois side. The majority of the river's flow drains into Lake Michigan via the Indiana Harbor and Ship Canal, sending about 1,500 cubic feet (42 m3) per second of water into the lake. A smaller part of the flow, at the river's western end, enters the Calumet River and ultimately drains into the Illinois and ultimately the Mississippi River.

Today, a large portion of the river's flow originates as municipal and industrial effluent, cooling and process water and storm water overflows. Although discharges have been reduced, a number of contaminants continue to impair the area. The river is among the country's most severely polluted, and as of 2015 was in the late stages of a major dredging project to remove thousands of tons of contaminated sediment and rehabilitate the river ecosystem.

The Grand Calumet is divided into an East and West branch, on the respective sides of the Indiana Harbor Canal. The East Branch, which drains entirely into Lake Michigan, rises in Marquette Park in Gary's Miller Beach neighborhood, passing through a series of three lagoons before flowing into the Miller Woods unit of Indiana Dunes National Park and then on to the industrial zone of Gary. It leaves Gary by passing under Cline Avenue, and then defines the boundary between East Chicago and Hammond until reaching the Indiana Harbor Canal near Kennedy Avenue.

In addition, the Indiana Harbor Canal itself is sometimes treated as a part of the Grand Calumet, which brings the river's total length to 16.0 miles (25.7 km).

The Grand Calumet flows through the Calumet Lacustrine Plain, a region of low, undulating sandy terrain adjoining Lake Michigan. Groundwater contributions to the river, which account for less than 10% of total flow, come from the Calumet Aquifer, an unconfined water-table aquifer. The Calumet Aquifer is less than 10 feet below the surface in most areas, and has an average thickness of 40 feet. 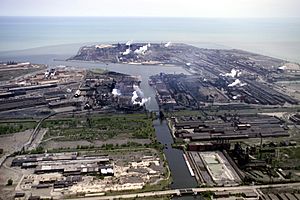 Aerial view of the Indiana Harbor Canal at Lake Michigan

Prior to the industrialization of the Chicago area and the creation of the Chicago Area Waterway System, the Grand Calumet flowed into Lake Michigan at Marquette Park in Miller Beach, near where its headwaters now lie. In this original configuration, the Grand Calumet included much of what is now the Little Calumet River, while the original "Little Calumet" was just a minor stream draining out into Lake Calumet. This original river is sometimes called by the older name Konomick or Kennomick to distinguishing it from the Grand Calumet of today; the term comes from the Miami kinwikami, or "long water river".

This arrangement began to shift in the early 19th century, either in 1805 or between 1809 and 1820, when some combination of flooding and human excavation opened up a channel allowing the upper Grand Calumet (now Little Calumet) to drain directly into Lake Calumet via the original Little Calumet channel. This created the basic definitions of the rivers as they exist today, as what had been the upper reaches of the Grand Calumet now became part of the Little Calumet. The Grand Calumet at this point still flowed from west to east, emptying into the lake at Miller Beach.

In 1848, the Calumet Feeder Canal was constructed to carry water from the Calumet system at Blue Island to the Illinois and Michigan Canal, which was suffering from low water levels. This reversed the flow of the Grand Calumet, so that it now flowed from east to west, draining out of Lake Michigan at Miller Beach. By 1872, the river's original mouth at Miller had been completely blocked by sandbars.

Industrial development on the banks of the Grand Calumet began in the late 19th century, starting with the George Hammond packing company in Hammond. The accumulation of industrial sediment in the river had become problematic by 1885. The construction of the Gary Works in 1905 involved diverting and channelizing a considerable part of the East Branch to make way for the new steel mill. Previously, the Grand Calumet had flowed across a large part of the present-day mill site, and spread to 1,000 feet wide during floods.

Continuing industrialization along the Grand Calumet led to steadily increasing levels of pollution. By the mid-20th century, the river "had become an industrial sewer, incapable of supporting any life except for blue-green algae and sludgeworms." 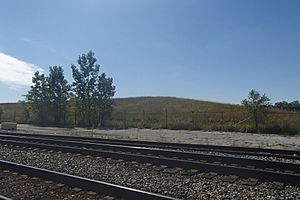 The USS Smelter and Lead Refinery site, one of several Superfund sites along the Grand Calumet.

Approximately 90% of the flow of the Grand Calumet consists of industrial and municipal effluent.

AoCs are designated by having an impairment in at least one of fourteen beneficial uses. The Grand Calumet is the only AoC to be impaired on all fourteen. These impairments include total fish consumption restrictions, beach closings, fish tumors or deformities, animal deformities or reproductive problems, and loss or degradation of fish and wildlife habitat, benthos, phytoplankton, and zooplankton populations, among others.

As of 2015, a major dredging project was under way to remove several hundred thousand tons of toxic sediment from the bottom of the Grand Calumet. The dredging was expected to be complete in 2016.

The largest extent of the river's impairment comes from the historical sediment contamination by the industrial activities already mentioned. Today, sediments on the river bottom are "among the most contaminated and toxic that have ever been reported." Only sludge worms inhabit the Indiana Harbor and Ship Canal, indicating that severe pollution exists. The Grand Calumet suffers from contamination from polychlorinated biphenyls (PCBs), polynuclear aromatic hydrocarbons (PAHs). and heavy metals, such as mercury, cadmium, chromium and lead. Additional problems include high fecal coliform bacteria levels, biochemical oxygen demand (BOD) and suspended solids, oil and grease. These contaminants originate from both point and nonpoint sources.

The total area drained by the Grand Calumet is less than 50 square miles. It is one of the region's smallest watersheds.

Fish populations in most of the Grand Calumet were virtually wiped out in the 20th century, although the headwaters area continues to support sensitive native species including the Iowa darter. The fish community in most of the river today is dominated by exotic and nonindigenous detritivores.

A string of nature preserves operated by The Nature Conservancy, the Shirley Heinze Land Trust and the Lake County Parks Department run along the banks of the lower East Branch in Gary, East Chicago and Hammond. Known as the Tolleston Strand Plain, the preserves are home to the dune and swale habitat, which once covered large areas around the Great Lakes but is now considered globally rare. Dune and swale complexes are known for their high levels of biodiversity. Endangered and threatened species in these nature preserves along the Grand Calumet include the Karner blue butterfly. Other rare species include the Franklin's ground squirrel, Blanding's turtle, the glass lizard and the black-crowned night heron.

All content from Kiddle encyclopedia articles (including the article images and facts) can be freely used under Attribution-ShareAlike license, unless stated otherwise. Cite this article:
Grand Calumet River Facts for Kids. Kiddle Encyclopedia.