Most JCPenney stores are located in suburban shopping malls. Before 1966, most of its stores were located in downtown areas. As shopping malls became more popular during the latter half of the 20th century, JCPenney followed the trend by relocating and developing stores to anchor the malls. In more recent years, the chain has continued to follow consumer traffic, echoing the retailing trend of opening some freestanding stores, including some next door to competitors. Certain stores are located in power centers. The company has been an Internet retailer since 1998. It has streamlined its catalog and distribution while undergoing renovation improvements at store level.

James Cash Penney was born in Hamilton, Missouri. In 1898, Penney went to work for Thomas Callahan and Guy Johnson, who owned dry goods stores called Golden Rule stores in Colorado and Wyoming. Callahan and Johnson asked Penney to join them in opening a new Golden Rule store. Using money from savings and a loan, Penney joined the partnership and moved Kemmerer, Wyoming, to start his own store.

Penney opened the store on April 14, 1902. He participated in the creation of two more stores, and purchased full interest in all three locations when Callahan and Johnson dissolved their partnership in 1907. In 1909, Penney moved his company headquarters to Salt Lake City, Utah to be closer to banks and railroads. By 1912, Penney had 34 stores in the Rocky Mountain States. In 1913, all stores were consolidated under the J.C. Penney banner. The so-called "mother store", in Kemmerer, opened as the chain's second location in 1904. It still operates, as of 2011, albeit with shorter hours than many other locations. 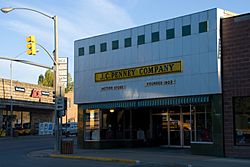 JCPenney reached its peak number of stores in 1973, with 2,053 stores, 300 of which were full-line establishments. 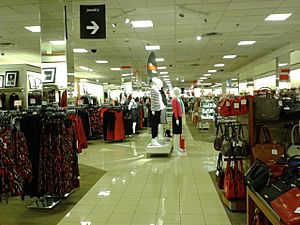 In 1983, JCPenney discontinued its appliance, hardware and auto center departments, and also sold its automotive centers to Firestone. Also in 1983, JCPenney began selling online through the Viewtron videotex service. In 1984, JCPenney acquired the First National Bank of Harrington, Delaware and renamed it JCPenney National Bank. With the bank the company became able to issue its own MasterCard and Visa cards. The company also began accepting American Express cards. In April 1987, the company announced that it was moving its headquarters to Dallas, Texas. After several years of development, the JCPenney Television Shopping Channel appeared on cable systems beginning in 1989.

By the mid-1980s, all JCPenney stores had discontinued sales of firearms. Before this point, JCPenney carried rifles and shotguns branded as JCPenney but produced by numerous established firearms manufacturers.

In 1998, JCPenney launched its Internet store. In early 2001, JCPenney closed 44 under-performing stores. On April 14, 2002, JCPenney celebrated 100 years as a retailer. In 2003, the company opened three off-the-mall stores in strip centers. These stores were located in Texas, Minnesota, and Indiana. The new one-level, 94,000 sq ft (8,700 m2) format stores focus on convenience with wider aisles and centralized checkouts.

All content from Kiddle encyclopedia articles (including the article images and facts) can be freely used under Attribution-ShareAlike license, unless stated otherwise. Cite this article:
J.C. Penney Facts for Kids. Kiddle Encyclopedia.