Jacopo Furio Sarno ( born September 1, 1989) is an Italian actor, voice actor and singer. Since 2013 Sarno has been known as "Jake Sarno". Active in the world of acting as a child, he began starring in several sitcoms, most produced by Mediaset. In the early 2000s he continued to work as an actor in theater and film, as well as on television, where he became one of the familiar faces of the sitcom produced by Disney Channel. During his career he has also tried his hand engraving of records and conducting television.

He is the son of Patrizia Bissi and Franz A. Sarno. In 2015 he received his Master of Philosophy degree in Università degli Studi di Milano.

He made his debut very young and became a familiar face of television by the second half of the 90s, playing in some sitcom and advertising.

In 1995 he made his debut as an actor in the sitcom Io e la mamma (Mom and I), alongside Gerry Scotti and Delia Scala, playing the role Paolino for all seasons, until 1997. Two years later, back on television, he was a regular on Canale 5 and in a sitcom Don Luca, where he played the role of Mirko for only two seasons. The following year he made his film debut, playing a small part in the last film the fantasy saga Fantozzi 2000 - La clonazione (Fantozzi 2000 – Cloning), in which he played the role of a child abandoned by parents too busy with their work. In 2001 he went back to basics and provides the sitcom Bradipo (Sloth), aired on MTV Italy, after a three-year hiatus, he played a small part in the sitcom Il Mammo (The Mom) with Enzo Iachetti and Natalia Estrada.

In 1996 reads short film Il soffitto (The Ceiling), directed by Barbara Nava, and this interpretation was considered Best Actor Film Festival Messina. He debuted in 2006 as a television host for the music program Nickelodeon Kids' Choice Awards Destination Kids by Nickelodeon. The following year he starred on the show for children of Jaky "Quelli dell'intervallo", while in 2010 he obtained a main role in the film by Massimo Boldi "A Natale mi sposo".

In the same period he made some appearances in television series "Fiore e Tinelli" and "The Suite Life on Deck", and the music video for the song "Grazie a te" (Thank you), Ambra Lo Faro.

In 2011 he was one of the stars of Canale 5 television series "Non smettere di sognare", in the part of Phil. In the summer of that year leads, Satellite DeAKids issuer, "Arriva lo Zecchino", transmission itinerant shows the auditions for the 2011 edition of the "Zecchino d'Oro".

From 1999 is entered to the "Associazione Doppiatori Attori Pubblicitari" (ADAP) (Voiced Actors Advertising Association), beginning the same year his career as a voice actor.

Besides the dubbing of many films, of course, for the roles of young people and cartoon characters, lends his voice several times and several characters, including the sparrow protagonist of the famous advertising with Alessandro Del Piero also the voice of Harry Potter in video game learned from books. In 2009, at the film festival in Viareggio Europa Cinema he won the award for the best artist. 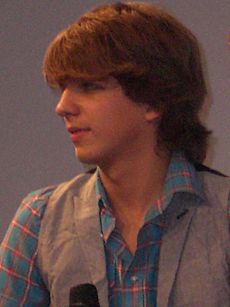 In addition to film and television actor, he performed well at the theater in some musical, after studying some of the techniques of music, including singing and music theory, guitar and harmonica blues. These studies have allowed him to also take a career in music, participating in the Castrocaro Music Festival in 2004, where he reached the semi-finals, also is a component of a new band Hard Rock Milan because he had previously taken part in another group of the same city and same kind of music the Dusty Heads (heads covered with dust) and in both has and has had the role of singer.

From 2005 until the spring of 2007 was in tour with the musical Datemi tre caravelle, directed by Gianni Quaranta, with Alessandro Preziosi, while in March 2008 part with the important leading role in the Italian stage version of High School Musical on Stage!.

In 2007 appears in the music video "Grazie a te" (Thank you) the singer and colleague in Quelli dell'intervallo, (Ambra Lo Faro).

Also, for Disney, Jacopo made an appearance in the episode ("When in Rome...") the first season of the TV series The Suite Life on Deck playing (Luca Fendini), a musician Italian who met in Rome, London and fell in love.

Finally, in 2009, he released his first album 1989 and his first single from his album "È Tardi". In March 2010 released an EP Jacopo Sarno containing the single "Tommy E La Sedia Vuota", written with Nicholas Agliardi, and a selection of songs from 1989.

Despite his young age, Jacopo is also working on the humanitarian front. Since 2009 he is testimonials Change Onlu] Association.

In 2010 it published a maxi single, This Is Christmas. In 2011, he recorded a cover of "Music to Watch Girls By" Bob Crewe with Stefano Signoroni & The Muffinchasers. In the same year he signed with T.Rex Studio. 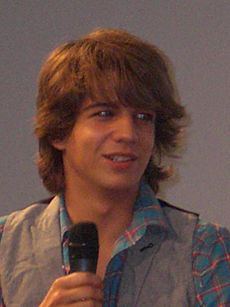 Jacopo Sarno on September 1 performed in a minilive, with some tracks from his debut album 1989 in Meet & Green Festival.

All content from Kiddle encyclopedia articles (including the article images and facts) can be freely used under Attribution-ShareAlike license, unless stated otherwise. Cite this article:
Jacopo Sarno Facts for Kids. Kiddle Encyclopedia.