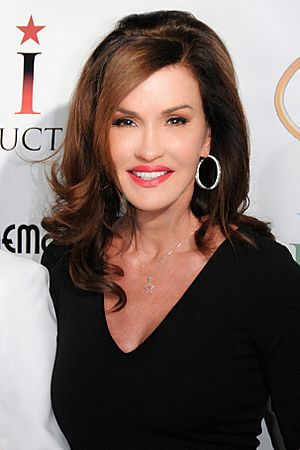 Janice Doreen Dickinson (who was born on February 15, 1955) is an American model who was very popular in 1970s and 1980s. She was born in Brooklyn, New York City and is of Polish maternal descent. She has been on the cover of many magazines, which include Vogue, Marie Claire and Cosmopolitan. She has been on several reality television shows.

In March 2016, it was revealed that Dickinson has been diagnosed with breast cancer.

All content from Kiddle encyclopedia articles (including the article images and facts) can be freely used under Attribution-ShareAlike license, unless stated otherwise. Cite this article:
Janice Dickinson Facts for Kids. Kiddle Encyclopedia.