Jason Joel Desrouleaux (born September 21, 1989), known professionally as Jason Derulo, is an American singer, songwriter, and dancer. Since the start of his solo recording career in 2009, Derulo has sold over 30 million singles and has achieved eleven Platinum singles. 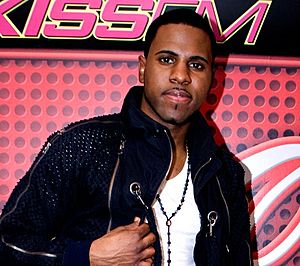 Derulo was born in Miramar, Florida, the son of Haitian parents. He has two older siblings. He started singing at a young age. He attended performing arts schools in Florida and made some early attempts at music composition, writing his first song at the age of eight. His writing skills began attracting attention when he was a teenager. He also wrote "Bossy" for Birdman, a New Orleans-based rapper, and made a guest appearance on the song, highlighting his ability as a vocalist.

Derulo's music is generally pop, but also incorporates R&B and hip-hop influences. He has predominantly named Michael Jackson as his inspiration. Derulo states "He is the reason I am who I am today. When I was 4 years old, I saw him for the first time. I saw how he moved the crowd and how people were just so touched". His other musical influences include Elvis Presley, Madonna, Prince, Usher and Justin Timberlake.

All content from Kiddle encyclopedia articles (including the article images and facts) can be freely used under Attribution-ShareAlike license, unless stated otherwise. Cite this article:
Jason Derülo Facts for Kids. Kiddle Encyclopedia.