Kids Encyclopedia Facts
"Lyotard" redirects here. It is not to be confused with Leotard, Léotard, or Liotard. 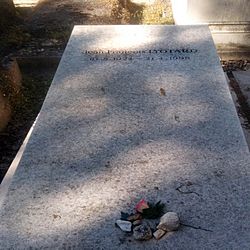 Jean-François Lyotard ( 10 August 1924 – 21 April 1998) was a French philosopher, sociologist, and literary theorist. His interdisciplinary discourse spans such topics as epistemology and communication, the human body, modern art and postmodern art, literature and critical theory, music, film, time and memory, space, the city and landscape, the sublime, and the relation between aesthetics and politics. He is best known for his articulation of postmodernism after the late 1970s and the analysis of the impact of postmodernity on the human condition. Lyotard was a key personality in contemporary Continental philosophy and author of 26 books and many articles. He was a director of the International College of Philosophy which was founded by Jacques Derrida, François Châtelet, Jean-Pierre Faye and Dominique Lecourt.

All content from Kiddle encyclopedia articles (including the article images and facts) can be freely used under Attribution-ShareAlike license, unless stated otherwise. Cite this article:
Jean-François Lyotard Facts for Kids. Kiddle Encyclopedia.