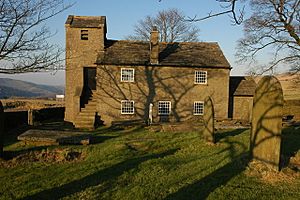 From the south, showing tower staircase

Jenkin Chapel, stands in an isolated position on the western slopes of the Pennines, 4.3 miles (7 km) northeast of Macclesfield, Cheshire, England. It is recorded in the National Heritage List for England as a designated Grade II* listed building. The chapel lies at the junction of three ancient trackways, known as "salters' ways" because they were used by packhorses carrying salt. Later the tracks were used by cattle drovers and sheep dealers. It is an Anglican chapel in the diocese of Chester, the archdeaconry of Macclesfield and the deanery of Macclesfield. Its benefice is combined with those of Holy Trinity, Rainow and Forest Chapel, Macclesfield Forest and Wildboarclough.

The chapel was built using local materials in 1733 by local people who also raised money to pay for a minister. A tower was added in 1755.

The appearance of the chapel is more that of a Georgian farmhouse with a chimney stack than a church. It consists of a two-storey nave, a one-storey chapel and vestry, and a three-stage tower with a saddleback roof. The tower has an external staircase, a bell chamber and a porch with stone benches. A chimney rises from the middle of the south wall. The windows are Georgian in style, with sashes and small panes of glass.

Inside the chapel are box pews, an octagonal pulpit and a carved reading desk. The chancel is panelled and divided from the nave by rails consisting of turned balusters. Hanging from a lintel at the entrance to the chancel are similar balusters forming an arch. In the chancel is a small stone font with an oak cover. At the west end is a gallery on which is the coat of arms of the Stopford family who lived in nearby Saltersford Hall (itself a Grade II listed building) in the 17th century. On the floor are grave slabs relating to the Turner family who were later residents of the hall. Chapel registers date from 1770.

There is disagreement about the origin of the name "Jenkin". One theory is that the junction was the trading site for a man called Jenkin, from Ruthin, North Wales. The track-marking stone at this point was known as "Jenkin Cross". Other theories are that Jenkin was the name of a local farming family, or that it was the name of a "fiery Welsh preacher" who preached at the horse fair held here.

The church is kept locked. Guided visits can be arranged in advance and are available for groups. Evensong is at 3pm on the second and fourth Sundays between Easter and Christmas.

The church featured in an episode of Hunted, shown on Channel 4 on 4 January 2018.

All content from Kiddle encyclopedia articles (including the article images and facts) can be freely used under Attribution-ShareAlike license, unless stated otherwise. Cite this article:
Jenkin Chapel Facts for Kids. Kiddle Encyclopedia.