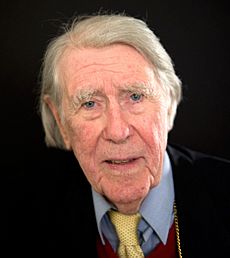 Captain Jerry Roberts MBE (Raymond C. Roberts) (18 November 1920 – 25 March 2014) was a British businessman and wartime codebreaker. During World War II, Roberts was worked as a codebreaker at Bletchley Park from 1941 to 1945. He was a leading codebreaker and linguist, who worked on Tunny — Hitler's most top-level code. He was born in Wembley, Middlesex.

All content from Kiddle encyclopedia articles (including the article images and facts) can be freely used under Attribution-ShareAlike license, unless stated otherwise. Cite this article:
Jerry Roberts Facts for Kids. Kiddle Encyclopedia.