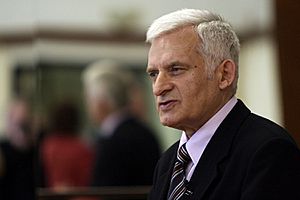 Jerzy Buzek (born 3 July 1940 in Smilovice, Poland) is a Polish politician and scientist.

He was President of the European Parliament from 2009 to 2012. Between 1997 and 2001, he was the Prime Minister of Poland and a member of the Polish parliament.

Buzek attended the grammar school in Chorzów and got his Matura there. After successful exams, he went to the Technical University of Silesia. In Silesia, Jerzy Buzek studied chemistry and got a diploma in 1963.

In the years 1971 and 1972, he researched at the University of Cambridge in Great Britain.

During his studies and time spent in research, Buzek wrote about 200 patents and other papers.

During his time as the Prime Minister of Poland, his success was that Poland joined Nato in 1998. In 2004, he got elected to be a member of the European Parliament.

All content from Kiddle encyclopedia articles (including the article images and facts) can be freely used under Attribution-ShareAlike license, unless stated otherwise. Cite this article:
Jerzy Buzek Facts for Kids. Kiddle Encyclopedia.