John Moulder Wilson (October 8, 1837 – February 1, 1919) was a Union Army engineer and later served as Chief of Engineers as well as serving as Superintendent of the United States Military Academy from 1889–1893. He was a recipient of the Medal of Honor for bravery in combat during the American Civil War.

Wilson was born in Washington, D.C.. He graduated from the United States Military Academy in 1860 and was commissioned into combined Batteries B & L, 2nd U.S. Artillery as part of the U.S. Horse Artillery Brigade. He transferred to the Corps of Topographical Engineers in July 1862 and was awarded the Medal of Honor for fighting at the Battle of Malvern Hill in Virginia, on August 6, 1862. He joined the United States Army Corps of Engineers in 1863 and received three brevet promotions for gallant service in Alabama. 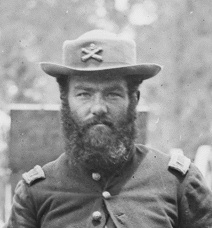 After the Civil War, Wilson worked on Hudson River improvements and drafted plans for the canal around the Cascades of the Columbia River. He improved the Great Lakes harbors of Oswego, New York, Cleveland, Ohio, and Toledo, Ohio. Wilson headed the divisions of the Chief's office pertaining to military affairs for four years, was in charge of public buildings and grounds in Washington during both Grover Cleveland administrations, and was Superintendent of West Point from 1889-1893. Before his appointment as Chief of Engineers, he was Northeast Division Engineer. As Chief of Engineers, he directed the Corps' activities during the Spanish–American War.

Wilson retired from the Corps on April 30, 1901. He served as an arbitrator during the Coal Strike of 1902, and was president of the Columbia Hospital for Women from 1902 to 1907. He remained a prominent figure in the cultural life of Washington until his death there on February 1, 1919.

All content from Kiddle encyclopedia articles (including the article images and facts) can be freely used under Attribution-ShareAlike license, unless stated otherwise. Cite this article:
John Moulder Wilson Facts for Kids. Kiddle Encyclopedia.