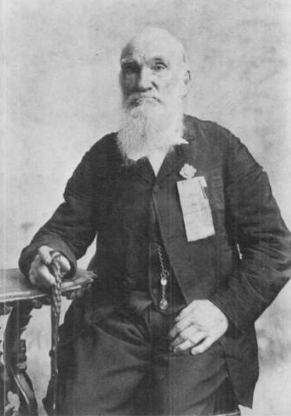 John Steele (March 21, 1821 – December 31, 1903) was an Irish-American pioneer, local politician, physician, and astrologist. Born in Ireland, after converting to the Church of Jesus Christ of Latter-day Saints in Glasgow, Steele and his wife emigrated to Nauvoo, Illinois. Steele joined the Mormon Battalion and traveled to Salt Lake City with the Mormon pioneers. He was one of the founders of Parowan, Utah. Steele also contributed to the development of Iron, Kane, and Washington counties in Utah.

He practiced as an unorthodox physician in Toquerville, using herbs, astrology, and aspects of magic to treat patients. He could no longer practice in Utah after physician licences were required, but his knowledge of astrology and broken bone setting were still desired. His daughter, Young Elizabeth Steele, was the first white child born in Utah.

All content from Kiddle encyclopedia articles (including the article images and facts) can be freely used under Attribution-ShareAlike license, unless stated otherwise. Cite this article:
John Steele (pioneer) Facts for Kids. Kiddle Encyclopedia.