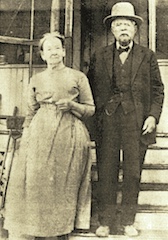 John and Elizabeth Tallman settled in Pine Grove of Colorado Territory, present-day Parker, Colorado, in 1866. They were among the early settlers in Douglas County, Colorado, with John working as a cattle rancher, sawmill hand, county clerk, and businessman. John and Elizabeth ran the Elizabeth Hotel in the late 1890s. She also wrote of her experiences with Native Americans and observations of warfare among the Cheyenne, Arapaho, and the Utes.

All content from Kiddle encyclopedia articles (including the article images and facts) can be freely used under Attribution-ShareAlike license, unless stated otherwise. Cite this article:
John and Elizabeth Tallman Facts for Kids. Kiddle Encyclopedia.