Julieta Venegas Percevault (born November 24, 1970 in Long Beach, California), is a Mexican singer, songwriter, instrumentalist and producer. She sings pop-rock in the Spanish language. She speaks English, Portuguese, and Spanish.

She plays several instruments such as acoustic guitar, accordion, and keyboard. She has won five Latin Grammys and one Grammy Award. She has composed music for theater and performed in soundtracks for two movies. 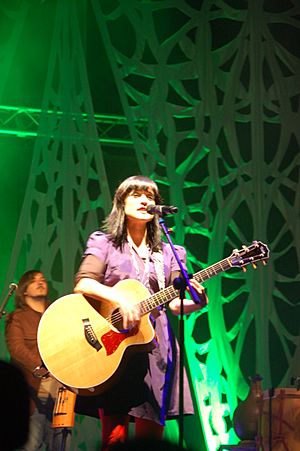 Venegas began playing instruments at the age of 10 when her parents first sent her to piano lessons. Music became her passion. At the start of her career, she worked with a few bands in Tijuana, and then later in Mexico City.

Her first solo album was released in 1998, she recorded, toured and played live. In 2007, she worked with Miranda! to record the song "Perfecta," which became a chart-topping single in 2008 in Latin America. Also that year, she was featured in MTV Unplugged which led to a DVD and CD.

According to Billboard "Venegas has maintained one of the most consistent yet understated careers since her solo debut, Aquí, more than two decades ago. A pioneer whose music and image have broken Latina stereotypes, Venegas has forged a path between Latin alternative and pop music, and supported the strong wave of Mexican female artists.

All content from Kiddle encyclopedia articles (including the article images and facts) can be freely used under Attribution-ShareAlike license, unless stated otherwise. Cite this article:
Julieta Venegas Facts for Kids. Kiddle Encyclopedia.