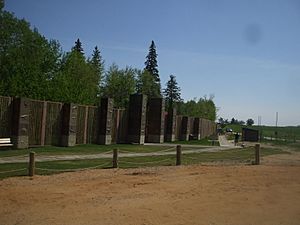 The entrance to the park.

Jurassic Forest is a seasonal tourist attraction located on Highway 28 just north of Gibbons, Alberta, just minutes away from Edmonton, Alberta by vehicle. The facility is situated in a mature boreal forest setting and features more than 40 animatronic dinosaurs in their natural habitat. The dinosaurs can be easily viewed from wooden trails that lead through the forest. The trail system consists of two separate loops, the South Discovery trail and the North Discovery trail with each measuring about 1.0 km in length. The trails are wheelchair friendly and are accessible in all types of weather conditions.

Jurassic Forest is an educational and entertainment centre that opened on Friday, July 30, 2010. When it opened, the facility featured a total of 42 animatronic dinosaurs, an interpretive centre, concession and gift shop area. In 2011, several facility enhancements were undertaken including the development of an upgraded concession area, enhanced playground area and the addition of three interactive educational displays inside the interpretive centre. A new dinosaur was also added to the North Discovery trail, as the Spinosaurus became the 43rd dinosaur to be featured at Jurassic Forest.

In 2012, the addition of three new Pachyrhinosaurus, and a Troodon highlighted the opening of the new season.

In 2013, the expansion of the discovery trails continued with the brand new North and South trail extensions. "From Scales to Fur" is the theme of the south extension. "Taking Flight" is the theme of the north extension. Both trail extensions are featuring new creatures that are not consistent with the dinosaur only displays of the past three years. With these new animals, the total number of displays is now 51 animals. 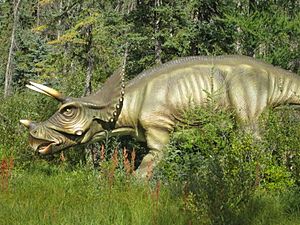 A dinosaur along the North Loop trail of the park

All content from Kiddle encyclopedia articles (including the article images and facts) can be freely used under Attribution-ShareAlike license, unless stated otherwise. Cite this article:
Jurassic Forest (tourist attraction) Facts for Kids. Kiddle Encyclopedia.