Kargil is a district of Ladakh division in the Indian state of Jammu and Kashmir. Kargil lies near the Line of Control and is surrounded by the Pakistan-administered region of Gilgit–Baltistan to the north, and the Kashmir Valley and Jammu divisions to the west. Kargil is divided into 9 blocks which are, Kargil, Drass, Sankoo, Taisuru, Shargole, Shakar-Chiktan, Zanskar, GM Pore/Trespone and Lungnak. It has three Tehsils, namely Kargil, Zanskar and Sankoo. Zanskar and Drass are also sub divisions, and are headed administratively by a Sub Divisional Magistrate.

According to the 2011 census, it is the least populous district of the 22 districts in Jammu and Kashmir. 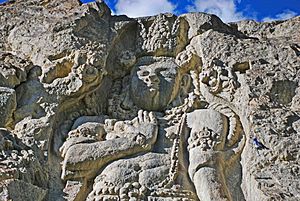 With a population of 140,000 Kargil is the only Muslim majority district in Ladakh. Of total population, 85% are Muslim, of which 73% follow Shia Islam. Most of the district's Muslims are found in Kargil town, Drass, Wakha and the lower Suru valley. The remainder 14% are followers of Tibetan Buddhism. Another 1% of the population follow Hinduism and Sikhism.

Much of Kargil population is inhabited by the Burig and Balti people of Tibetan origin (converting from Buddhism to Islam in the 16th Century). Of late, immigrants from Kashmir and Hindus Jammu have come to settle in Kargil. 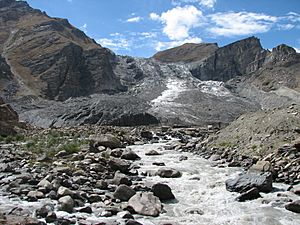 Kargil district is nestled in the Himalayas, giving it a cool, temperate climate. Summers are warm with cool nights, while winters are long and cold with temperatures often dropping to −15 °C (5 °F) with recorded temperatures of −60 °C (−76 °F) in the tiny town of Dras, situated 56 km (35 mi) from the Kargil town. The Zanskar Valley is colder.

Kargil district is spread over 14,086 km2 (5,439 sq mi). The Suru River flows through the district. National Highway 1D, connecting Srinagar to Leh, passes through Kargil. This highway is typically open for traffic only from May to December due to heavy snowfall at the Zoji La. 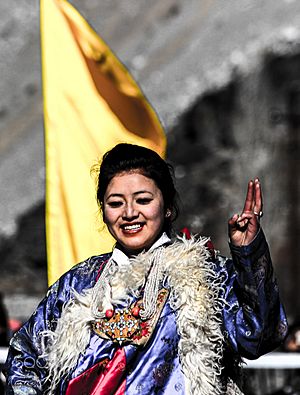 Though earlier Tibetan contact had an influence upon the people of both Kargil and Leh, after the spread of Shia Islam the people of Kargil came under heavy influence of Persian culture.

Social ceremonies such as marriages still carry many customs and rituals which are common to both the Muslims and Buddhists. Local folk songs which are called rgya-glu and balti ghazals are still quite popular and are performed enthusiastically at social gatherings. The J&K tourism ministry annually organises festivals in which various programmes are organised to highlight the culture so as to boost the tourism industry in the district. However, the tourism industry is still undeveloped despite attractive natural as well as rich cultural resources due to bad infrastructure and severe accommodation problems.

All content from Kiddle encyclopedia articles (including the article images and facts) can be freely used under Attribution-ShareAlike license, unless stated otherwise. Cite this article:
Kargil district Facts for Kids. Kiddle Encyclopedia.