Kemper County is a county located in the U.S. state of Mississippi. As of the 2010 census, the population was 10,456. Its county seat is De Kalb. The county is named in honor of Reuben Kemper.

The county is part of the Meridian, MS Micropolitan Statistical Area. In 2010 the Mississippi Public Service Commission approved construction of the Kemper Project, designed to use "clean coal" to produce electricity for 23 counties in eastern part of the state. As of February 2017, it was not completed and had cost overruns. It is designed as a model project to use gasification and carbon-capture technologies at this scale.

East Mississippi Community College is located in Kemper County in the town of Scooba, at the junction of US 45 and Mississippi Highway 16.

In this county the land was developed by white planters for cotton cultivation in the 19th century. It continues to be largely rural. After the American Civil War and Reconstruction, racial violence increased as whites struggled to regain power over the majority population of freedmen. In 1890, blacks made up the majority of the county' population: 10,084 blacks to 7,845 whites.

Beginning in late December 1906, there were several days of racial terror in the county.

In 1934, three African-American suspects in Kemper County were repeatedly whipped in order to force them to confess to murder. In Brown v. Mississippi (1936), the U.S. Supreme Court unanimously ruled such forced confessions violated the Due Process Clause of the Fourteenth Amendment, and were inadmissible at trial.

The peak of population in the county was in 1930. Mechanization of agriculture decreased the need for farm labor. From 1940 to 1970, the population declined markedly, as may be seen on the table below, as people moved to other areas for work. This was also the period of the second wave of the Great Migration of 5 million African Americans out of the South to the North and to the West Coast, where the defense industry had many jobs, beginning during World War II. 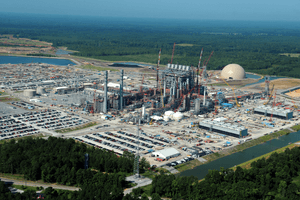 In 2010, the Mississippi Public Service Commission approved the construction of a lignite coal plant in Kemper County to be financed by electricity customers in twenty-three southeastern Mississippi counties being served by Mississippi Power Company. It is designed as a model project to use gasification and carbon-capture technologies at this scale.

The plant was strongly opposed by former Republican State Chairman Clarke Reed of Greenville, who favored a less-expensive natural gas-fueled plant. Reed called the project "...a horrible thing." He said it would be a political issue that could be used against Republicans for years.

The Kemper Project was scheduled to open in the third quarter of 2016, more than two years behind schedule. Its cost increased to $6.6 billion—three times original cost estimate. As of February 2017, the project was still not in service, and the cost had increased to $7.1 billion.

All content from Kiddle encyclopedia articles (including the article images and facts) can be freely used under Attribution-ShareAlike license, unless stated otherwise. Cite this article:
Kemper County, Mississippi Facts for Kids. Kiddle Encyclopedia.