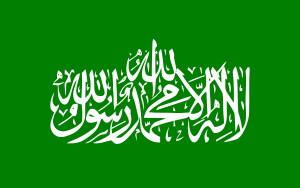 Flag of Hamas, with the Shahada written on it.

After the founding of Hamas in 1987, Mashal became the leader of the Kuwaiti branch of the organization. In 1992, he became a founding member of Hamas' politburo and its chairman. He became the recognized head of Hamas after Israel assassinated both Sheikh Ahmed Yassin and his successor Abdel Aziz al-Rantisi in the spring of 2004. Under his leadership, Hamas stunned the world by winning a majority of the seats in the Palestinian legislative election in 2006. Mashal stepped down as Hamas' politburo chairman at the end of his term limit in 2017.

The Six-Day War in 1967 forced Mashal's family to flee the West Bank and he has since then lived in other parts of the Arab world exile. For that reason, he was considered part of Hamas' "external leadership."

All content from Kiddle encyclopedia articles (including the article images and facts) can be freely used under Attribution-ShareAlike license, unless stated otherwise. Cite this article:
Khaled Mashal Facts for Kids. Kiddle Encyclopedia.