Klemzig is a suburb of Adelaide in the City of Port Adelaide Enfield. It was the first settlement of German immigrants in Australia and was named after the village of Klemzig, near Züllichau in southeastern Brandenburg in the German state of Prussia, where they originated from. That Klemzig is now in western Poland and is now known by the Polish name Klępsk. 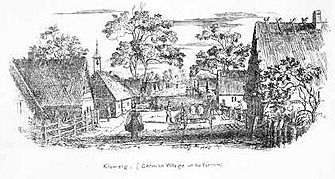 "Klemzig - German Village on the Torrens"

The initial establishment of Klemzig as an Old Lutheran settlement in the South Australian Colony is attributed to a decision by Pastor August Ludwig Christian Kavel. Pastor Kavel was determined to help his loyal parishioners emigrate from Brandenburg, Posen and Silesia to escape religious persecution by King Friedrich Wilhelm III of Prussia.

Pastor Kavel initially planned to move his parishioners to Russia near the Black Sea, where there were already numerous German settlements, but that had proved not to be feasible. Early in 1836, Kavel travelled to Hamburg to investigate possible emigration to America, but lack of available financial assistance caused this plan to collapse.

While in Hamburg, Kavel heard of the wealthy philanthropist, George Fife Angas, who was Chairman of the South Australian Company and likely to assist the Old Lutherans with their migration plans.

Kavel and a representative of his congregation travelled to London in March 1836 and met a very sympathetic George Fife Angas. Angas was a Baptist and was convinced that the Old Lutherans, who placed such high value on their religious beliefs, would make excellent settlers in the South Australian Colony.

Angas persuaded the Directors of the South Australian Company to support him in chartering and fitting out the barque Sarah which was to proceed to Hamburg. Here, 370 Old Lutherans were to set sail for South Australia on 8 June 1836. However, Prussian authorities refused to grant the necessary passports until finally, after a distressing delay of nearly two years, the Prussian Government relented. Over the next six years, many ships brought Kavel's Old Lutheran parishioners to the South Australian Colony.

Some of the emigrant ships included:

The first groups of Old Lutheran emigrants arrived in Port Misery between October 1838 and January 1839. With the assistance of George Fife Angas, many attempted to integrate into the local community by becoming tradespeople and labourers. Due to the scarcity of work, the lack of English as their preferred language, and the prejudice from the already established British farmers, many Old Lutherans found settlement increasingly hard.

In 1838, Klemzig was founded by these emigrants after George Fife Angas offered a section of land bordering the Torrens River, a few kilometres to the north-east of Adelaide.

Due to anti-German sentiment during World War I, the name of Klemzig was changed, as were many other German place names in Australia at the time. In 1917 Klemzig was renamed Gaza, commemorating the British victory in the Third Battle of Gaza, in which Australian troops had a major role. Klemzig was re-instated as the suburb name with the enactment of the South Australia Nomenclature Act of 1935 on 12 December 1935, but remnants of the name Gaza still exist with the local football club still bearing the name. During World War II the residents of Klemzig petitioned the Government of South Australia on a number of occasions to have the name Gaza re-instated but these requests were denied.

Klemzig is currently serviced by several bus routes including 271 and 273 along North East Road and 281 on McLauchlan Road, and also includes a station of the O-Bahn Busway.

Torrens Linear Park borders the O-Bahn and River Torrens to the south of the suburb and there is easy access to the CBD as well as neighbouring suburbs.

All content from Kiddle encyclopedia articles (including the article images and facts) can be freely used under Attribution-ShareAlike license, unless stated otherwise. Cite this article:
Klemzig, South Australia Facts for Kids. Kiddle Encyclopedia.