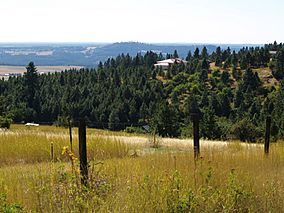 Krell Hill, also known as Tower Mountain, is a peak at the southern end of the Selkirk Mountains in Spokane County, Washington, within the Dishman Hills. It rises abruptly to the south east of the relatively flat Moran Prairie neighborhood of Spokane's South Hill. The northwestern portion of the mountain is known as Browne's Mountain and is a residential neighborhood just outside the Spokane city limits. Directly to the south of the mountain the vast farmland of the Palouse region extends as far as the eye can see. An area of high topographical relief continues to the east of the mountain towards Mica Peak and the Coeur d'Alene Mountains of the Bitterroot Range, in turn part of the Rocky Mountains. To the north of the mountain, it descends slowly into the Dishman Hills, before it further descends into the valley of the Spokane River and the City of Spokane Valley. Tower Mountain, while not the official name, is commonly used because there are many tall television and radio towers along the ridge atop the mountain.

Browne's Mountain is an unofficial neighborhood located just beyond the southeast tip of the City of Spokane named for Pioneer lawyer J.J. Browne. Bounded by Glenrose Road on the west and north and 57th Ave on the south, 57th also serves as the main access road into Browne's Mountain. The neighborhood is entirely residential. Its location on the hillside gives the houses views of the South Hill, Palouse, West Plains including the tower at Spokane International Airport, and the Selkirk mountains to the north and northwest of the city.

The Iller Creek Conservation Area consists of 966.62 acres on the eastern side of Krell Hill and is part of Spokane County's Conservation Futures program. Iller Creek drains the eastern slopes of the mountain along with a ridge to the east. The creek's headwaters lie on the northern flank of a ridge that extends eastward from the main mountain.

Along the ridge that extends eastward from the main peak are the Rocks of Sharon. On some maps the rocks are known simply as "Big Rock", after the largest of the monoliths which is significantly larger and taller than the rest. These granite monoliths are a popular location with rock climbers. The Conservation Futures program, after a few years of negotiations, completed a trailhead on Stevens Creek Road in August 2012 allowing climbers and hikers a shorter route to the rocks from the south. Before the Stevens Creek access was approved visitors had to start from the north at Holman and Rockcrest. From there visitors would hike up the valley of Iller Creek for over 2 miles.

All content from Kiddle encyclopedia articles (including the article images and facts) can be freely used under Attribution-ShareAlike license, unless stated otherwise. Cite this article:
Krell Hill Facts for Kids. Kiddle Encyclopedia.