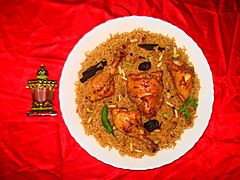 Seafood is a significant part of the Kuwaiti diet, especially fish. Mutabbaq samak is a national dish in Kuwait. Other local favourites are hamour (grouper), which is typically served grilled, fried, or with biryani rice because of its texture and taste; safi (rabbitfish); maid (mulletfish); and sobaity (sea bream).

Kuwait's traditional flatbread is called Iranian khubz. It is a large flatbread baked in a special oven and it is often topped with sesame seeds. Numerous local bakeries dot the country; the bakers are mainly Iranians (hence the name of the bread, "Iranian khubuz"). Bread is often served with mahyawa fish sauce.

There are many other cuisines available due to the international workforce in Kuwait. 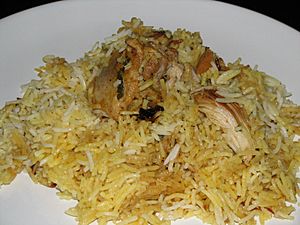 All content from Kiddle encyclopedia articles (including the article images and facts) can be freely used under Attribution-ShareAlike license, unless stated otherwise. Cite this article:
Kuwaiti cuisine Facts for Kids. Kiddle Encyclopedia.