Lake Coleridge is located in inland Canterbury, in New Zealand's South Island. Located 35 kilometres (22 mi) to the northwest of Methven, it has a surface area of 47 square kilometres (18 sq mi). The lake is situated in an over-deepened valley formed by a glacier over 20,000 years ago in the Pleistocene era. It currently has no natural outflows. There is a little settlement at the lake. 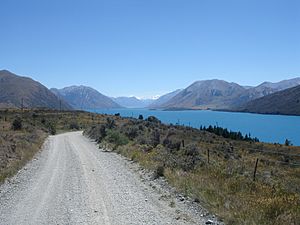 The lake is located to the north of the Rakaia River, and is the site of one of the country's earliest hydroelectric schemes, completed in 1914 and built mainly to supply power to Christchurch. The project makes use of the difference in altitude between the lake and river (the lake is 150 metres higher). Both the Harper and Wilberforce Rivers have had some of their flow diverted into the lake, with up to 100% of the Harper's flow diverted for the Lake Coleridge Power Station.

The lake was the epicentre for the 6.5 magnitude earthquake that struck on 26 June 1946.

All content from Kiddle encyclopedia articles (including the article images and facts) can be freely used under Attribution-ShareAlike license, unless stated otherwise. Cite this article:
Lake Coleridge Facts for Kids. Kiddle Encyclopedia.