Kids Encyclopedia Facts
(Redirected from Lake Macquarie, New South Wales)
This page is about the lake. For the local government area, see City of Lake Macquarie.

Lake Macquarie or Awaba is Australia's largest coastal salt water lagoon. Located in the Hunter Region of New South Wales, it covers an area of 110 square kilometres (42.5 sq mi) and is connected to the Tasman Sea by a short channel. Most of the residents of the City of Lake Macquarie live near the shores of the lake.

Lake Macquarie is twice as large as Sydney Harbour and is one of the largest salt water lagoons in the Southern Hemisphere. It is slightly smaller than Port Stephens, which is about 43 kilometres (27 mi) to the northeast of the lake.

Aboriginal people of the Awabakal nation lived in the area surrounding what is now known as Lake Macquarie for thousands of years. The name Awaba, which means "a plain surface" was used to describe the lake.

Lake Macquarie was first encountered by Europeans in 1800, when Captain William Reid, who had been sent from Sydney to retrieve a load of coal from Newcastle Harbour. Reid took a wrong turn and found himself in a lake rather than a river, with no coal to be seen anywhere. The name "Reid's Mistake" was retained until 1826, when it was renamed in honour of Governor Lachlan Macquarie.

The lake is of irregular shape and the land separating it from the ocean is only a few kilometres wide along most of its length. While there are a several small, sandy, low-level islets in the lake, some of which are grouped near the mouth, Pulbah Island, located south of Swansea is a large island offering views from rocky cliffs.

Lake Macquarie is connected to the sea by Swansea Channel and Lakes Entrance. Swansea Channel is approximately 380 metres (1,247 ft) wide and 2 kilometres (1.2 mi) long. It joins Lakes Entrance, a small bay measuring approximately 900 m (2,953 ft) wide by 2.2 km (1.4 mi) at the Swansea bridges. The bridges can lift to allow yachts and other larger pleasure craft into and out of the lake.

There is no point on the coast from which the entire expanse of the lake and its 174 km (108 mi) foreshore may be seen. However, a good view can be obtained from lookouts in the nearby Watagan Mountains.

The remnant and fragmented eucalypt forests on the southern margins of the lake have been identified by BirdLife International as a 121 km2 Important Bird Area (IBA) because they support significant numbers of endangered swift parrots and regent honeyeaters in years when the swamp mahoganies and other favoured trees are flowering. Masked owls and ospreys regularly nest within the IBA.

The Pulbah Island Nature Reserve is a protected 68-hectare (168-acre) nature reserve that is located in the southern part of the lake. Being approximately 1.6 kilometres (1 mi) long the island is, by far, the largest island in Lake Macquarie.

Pulbah Island is managed by the NSW National Parks & Wildlife Service. There are no permanent structures on the island and it is uninhabited although in the past a maintenance cottage existed on the island. Pulbah is an Australian indigenous Awabakal word meaning "island".

Weed infestation on the island is problematic. Local efforts have been made to remove and control weeds species such as Bitou bush, Lantana and Wandering Jew. It also has native trees such as spotted gum.

Kangaroos and koalas were introduced to the island during the early 1900s, but they have been extirpated by illegal hunting. Goannas are common on the island.

From the island there are clear views of the Wangi Wangi peninsula as well as the Eraring, Munmorah and Vales Point power stations.

The island has cliff faces on the west and south sides as well as the south east side. The rest of the island is edged by sandy beaches although the density of vegetation ensures that there is minimal beach at high tide. The east side of the island has a slight bay that is commonly frequented by leisure boats. Camping on the island is not permitted. Bushwalking and picnicking are permitted.

Pulbah Island is also a sacred site in Aboriginal culture for the Awabakal people and was declared an Aboriginal place in 1982. 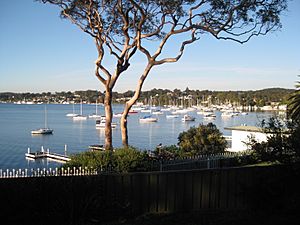 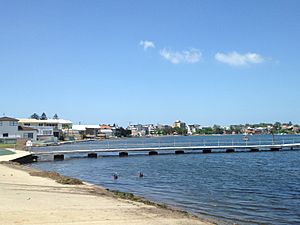 In 1998, the then NSW Premier, Bob Carr, announced the formation of a task force under the chairmanship of Clean Up Australia founder, Ian Kiernan. The report of the task force, known as the "Integrated Estuary and Catchment Management Framework" was accepted by the NSW State Cabinet in February 1999. The report recommended a unique institutional arrangement for implementation through the creation of the Office of the Lake Macquarie and Catchment Coordinator. This cooperative-based arrangement was a joint initiative of Lake Macquarie City Council, Wyong Shire Council, and the NSW Government, with major funding provided by these partners. To oversee the implementation process, a committee known as the Lake Macquarie Project Management Committee was appointed by the then Minister of Land and Water Conservation. The Committee would consist of representatives of both councils; community; regional directors of relevant government departments and three ex-officio members.

The action plan, known as the Lake Macquarie Improvement Plan has an emphasis on integration, both physically and administratively, as well as promoting a whole of government approach and strong community involvement. The physical works concentrated on treating the cause of the water problems in the lake by tackling stormwater runoff within the catchment. Again, the emphasis adopted included the use of soft engineering and the restoration of natural ecological processes where possible. After six years in operation, the Lake Macquarie Project Management Committee entered its third project phase in 2006.

A series of water quality indicators are used to monitor and quantify the water quality improvements observed by the community. The lake body generally has low nutrient concentrations, good water clarity and excellent dissolved oxygen levels. Activities that reduce the amount of sediments and nutrients washing into the Lake via stormwater run-off have assisted in improving water quality in Lake Macquarie. These activities include the construction of wetlands, the installation of stormwater treatment devices, bush regeneration and an increased awareness by the local community.

Recreational fishing is improving as fish stocks respond to the recent removal of commercial fishing and the significant increase in water quality that has come from a concerted environmental program undertaken by the state government and council. Since settlement lake-bed silt has increased in some areas due to unsealed roads, road shoulders and diffuse effects of urbanisation, however the quantity is far less than in nearby Lake Munmorah, and swimming is quite tolerable. Average water depth is approximately 8 m (26 ft) reaching a maximum depth of approximately 15 m (49 ft) east of Pulbah Island.

Recreational fishing, boating, kayaking and water skiing are all popular recreational activities on the lake. The popularity of kayaking is increasing.Sailing and yacht racing are also popular with the lake boasting many yacht clubs including:

All content from Kiddle encyclopedia articles (including the article images and facts) can be freely used under Attribution-ShareAlike license, unless stated otherwise. Cite this article:
Lake Macquarie (New South Wales) Facts for Kids. Kiddle Encyclopedia.