Lance Strulovitch, better known as Lance Stroll (born 29 October 1998) is a Canadian-Belgian racing driver competing under the Canadian flag in Formula One. He drives for Aston Martin in 2021, having previously driven for Williams and Racing Point. He was Italian F4 champion in 2014, Toyota Racing Series champion in 2015, and 2016 FIA European Formula 3 champion. He was part of the Ferrari Driver Academy from 2010 to 2015. He achieved his first podium finish, a 3rd place, at the 2017 Azerbaijan Grand Prix, becoming the second-youngest driver to finish an F1 race on the podium and the youngest (and latest as of the end of 2020) to do so during his rookie season. At the 2020 Turkish Grand Prix, Stroll took his first pole position in Formula One. Stroll also competed in endurance racing, taking part in the 24 Hours of Daytona in 2016 and 2018.

Stroll is the son of billionaire Canadian businessman Lawrence Stroll (part-owner of the Aston Martin Formula One team) and Belgian fashion designer Claire-Anne Callens, and has an older sister named Chloe. He is of Russian Jewish descent from his father's side. Stroll races under the Canadian flag and holds both Canadian and Belgian citizenship.

Like many race drivers, the Geneva-based Canadian began his motorsport career in karting at the age of 10. He recorded numerous race and championship wins in his native Canada and North America and in 2008, his first year of karting, he won the Federation de Sport Automobile du Quebec rookie of the year award and driver of the year in 2009. In 2010, Stroll became a member of the Ferrari Driver Academy.

Stroll made his competitive car racing debut in the 2014 Italian F4 Championship, driving for Prema Powerteam. Despite missing the final round due to injury, Stroll emerged as series champion, taking seven race wins, thirteen podium finishes and five pole positions. 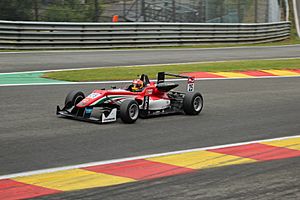 At the beginning of 2015, Stroll won the New Zealand-based Toyota Racing series, recording 10 podiums – including four wins – from 16 race starts. In the same year, he also contested the FIA Formula 3 European Championship with Prema Powerteam, in which his father by this time had taken a stake. He competed against future Formula One competitors Antonio Giovinazzi, Charles Leclerc, George Russell and Alexander Albon, winning one race at the Hockenheimring and achieving six total podium finishes in the 33-race series. He ended the season 5th in the championship. 2015 also marked Stroll's first and only appearance at the non-championship Formula Three Macau Grand Prix, which he finished in 8th place.

On 11 November 2015, it was announced that Stroll would leave the Ferrari Driver Academy to serve as a test driver for Williams.

Stroll began 2016 by finishing 5th at the 2016 24 Hours of Daytona, driving for Ford Chip Ganassi Racing in a Ford EcoBoost Prototype. He remained with Prema Powerteam for a third consecutive year to compete in his second season of the Formula 3 European Championship. He won the first race at Circuit Paul Ricard before taking thirteen more race victories over the season, including five consecutive victories in the final five races. He claimed the title with four races to go and ended the season 187 points clear of nearest competitor Maximilian Günther. 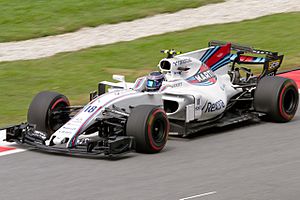 Stroll driving the Williams FW40 at the 2017 Malaysian Grand Prix

Stroll drove for the Williams team for the 2017 Formula One Season. He became the first Canadian Formula One driver since the 1997 World Drivers' Champion Jacques Villeneuve. Reportedly, Stroll's father, billionaire Lawrence Stroll, paid $80 million to Williams prior to Stroll's start in 2017. After three retirements, Stroll's first race finish came at the fourth round in Russia, where he finished in eleventh despite spinning on the first lap. In the Spanish Grand Prix, Stroll finished sixteenth and last of all the drivers to finish the race. Two weeks later, Stroll retired after brake failure in Monaco, but was still classified 15th. Stroll scored his first points in his home Grand Prix in Montreal, finishing in 9th place.

Stroll got his first podium by finishing third in the Azerbaijan Grand Prix, becoming the youngest rookie and the second youngest driver after Max Verstappen to finish on the podium in Formula One, at the age of 18 years and 239 days. Further, Stroll gained more positions on the opening lap than any of his rivals in the season.

Stroll registered the 4th fastest time during a wet qualifying session for the Italian Grand Prix. Due to both Red Bull drivers Daniel Ricciardo and Max Verstappen (respectively 3rd and 2nd) taking grid penalties, Stroll was promoted to the 2nd place on the starting grid, making him the youngest Formula One driver to start on the front row of a race at the age of 18 years and 310 days. Stroll finished 7th in the race.

At the third to last race of the 2017 season, the Mexican Grand Prix, Stroll worked his way up to 6th in the race from 11th on the grid, promoted from 12th after Daniel Ricciardo (originally 7th) was demoted due to penalties, and finished in that position, placing him ahead of teammate Felipe Massa on points scored for the first time this season. 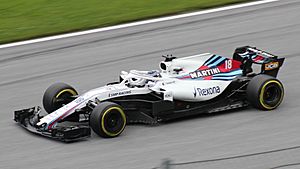 Stroll at the 2018 Austrian Grand Prix

2018 got off to a rough start, with multiple incidents and mistakes within the first few races. Despite an 8th place in Azerbaijan, Stroll scored his next point at Monza, having failed to score at his home race in Canada when he crashed with Brendon Hartley. Although the FW41 was well off the pace all season, it was reliable as Stroll only retired from 2 races during the season. 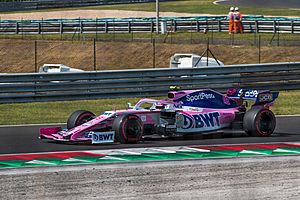 Stroll at the 2019 Hungarian Grand Prix

Stroll switched to driving for the newly renamed Racing Point team for the 2019 season alongside Sergio Pérez, replacing Esteban Ocon. Stroll scored his first points for his new team at the opening race in Australia, finishing 9th. At the Chinese Grand Prix, Stroll criticized team strategy after finishing outside of the point-scoring positions for the second consecutive race. In Spain he was involved in a collision with Lando Norris that ended both drivers' races. A third points finish came at his home race in Canada, where he finished 9th after starting in 17th.

In qualifying at the German Grand Prix, Stroll progressed to Q2 and qualified 15th, ending a streak of fourteen Grands Prix in which he had been eliminated in Q1. During the race, he narrowly missed out on a podium, running with slick tires on a drying track late in the race. He would cross the line in 4th place. Stroll's next points finish came in Belgium, where he started 16th and finished 10th. He scored his final points of the season after finishing 9th in Japan. His second and third retirements of the season came during the final two races, after he suffered a suspension failure in Brazil and brake issues in Abu Dhabi. Stroll finished his first season at Racing Point in 15th place in the championship with 21 points, considerably below teammate Pérez's 52 points, having been out-qualified by Pérez 18-3 over the season's 21 races. 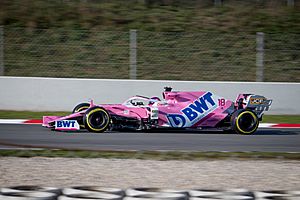 Stroll during pre-season testing in 2020

Stroll and Pérez were retained by Racing Point for 2020.' As a result of Canada’s national sporting authority resigning its mandate from the FIA, Stroll races under an American licence but is still shown as Canadian on every official recognition during race weekends. During the 2020 Austrian Grand Prix, he qualified in 9th place but then subsequently retired from the race following engine problems. Stroll finished 4th at the 2020 Hungarian Grand Prix after qualifying third and at the 2020 Italian Grand Prix, he secured his second podium in Formula One, matching his previous best finishing position of 3rd. After the race, he suggested that had he not misjudged the race restart following the red flag to clear Charles Leclerc's stranded Ferrari, he could have been in a position to win. Stroll was also in a strong position to secure another podium at the following Tuscan Grand Prix, but retired after a car failure caused him to crash.

Stroll was eliminated from the Russian Grand Prix on the first lap after Charles Leclerc made contact with him, causing Stroll to hit a wall. He withdrew from the Eifel Grand Prix at Nürburgring due to illness having sat out the third practice session. His team confirmed he did not have COVID-19, saying he had passed all necessary FIA tests in this regard. He was replaced for qualifying and the race by Nico Hülkenberg. Shortly after the Eifel Grand Prix, Stroll tested positive for COVID-19. He completed a 10-day isolation period and returned to racing at the Portuguese Grand Prix, in which he collided with Lando Norris. This caused Stroll's eventual retirement from the race, his fourth consecutive non-finish. Stroll took his first pole position at the Turkish Grand Prix after a wet qualifying session. In doing so, he became the first Canadian F1 driver to take pole position since Jacques Villeneuve at the 1997 European Grand Prix. Stroll led the race for 32 of the 58 laps, but reported severe tire graining and eventually fell to ninth place by the end of the race. After the race, Racing Point found damage on Stroll's front wing which they named as the cause of his tire issues. Shortly after the Bahrain Grand Prix was restarted following Romain Grosjean's accident, Stroll's car was flipped over after making contact with Daniil Kvyat at turn eight. Stroll was uninjured and was able to extract himself from the car.

Stroll earned his second podium of the 2020 season with a third place finish in the 2020 Sakhir Grand Prix. 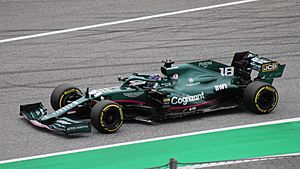 Stroll at the 2021 Austrian Grand Prix

Stroll continued to drive for the Racing Point team in 2021, under their new name Aston Martin. He was partnered by Sebastian Vettel in place of Pérez. In the first race of the season he finished tenth, having qualified on that same position. A video of him driving over a kerb at the 2021 Monaco Grand Prix became a popular internet meme, used as a bait-and-switch similar to the Rick Astley meme.

All content from Kiddle encyclopedia articles (including the article images and facts) can be freely used under Attribution-ShareAlike license, unless stated otherwise. Cite this article:
Lance Stroll Facts for Kids. Kiddle Encyclopedia.