Land Administration Building is a heritage-listed former government building at 142 George Street, Brisbane City, City of Brisbane, Queensland, Australia. It was designed by Thomas Pye and built from 1899 to 1905 by Arthur Midson for the Queensland Government. It was also known as the Executive Building or (now) the Old Executive Building. It was added to the Queensland Heritage Register on 21 October 1992.

The building was originally occupied by the offices of the Lands and Survey Departments, the Premier of Queensland, the Executive Council, and the Queensland National Art Gallery. It contains a heritage-listed World War I Honour board.

Since 1995, the building has been used as the hotel of the Treasury Casino (the casino being located in the former Treasury Building). 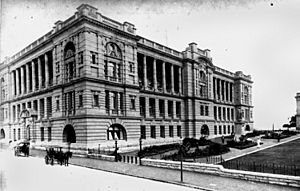 This four-storeyed masonry government office building was erected between 1901 and 1905. Initially intended as offices for the Lands and Survey Departments, it was finished and occupied in 1905 as the Executive Building, accommodating both the Lands and Survey Departments and offices of the Premier and Executive Council. It is the most prominent Brisbane example of Queensland Government building activity associated with the economic recovery of the late 1890s and with the Federation of Australia.

In 1898-1899 plans were prepared under the supervision of chief architect Thomas Pye of the Queensland Government Architect's office. Special provisions for the Lands Department included Minister's offices, drafting rooms, photographic and heliographic rooms, and a Land Court. With the inclusion of offices for the Executive Council and Cabinet, a separate entrance in George Street was designed for ministerial access.

A £2,900 contract for site preparation and foundations was commenced in 1899, and in 1901 the principal construction contract for £141,000 was let to Brisbane builder Arthur Midson.

The use of expanded metal lathing as a re-enforcement to the concrete floors and ceilings was amongst the earliest application of such technology in Australia, and was a first in Queensland.

The building was symbolic of Queensland's pride and achievement, and was seen as a showcase for Queensland materials. Granite used as the base course and plinth was obtained from Enoggera and Mount Crosby. Brown freestone from Helidon was used to face the outer walls, and freestone from Yangan near Warwick was used on the colonnade walls. The decorative carving to the facades was completed during 1903-1904. In the north-western elevation an allegorical group representing Queensland mining and agriculture was carved by New South Wales sculptor William Priestly MacIntosh to a design by Thomas Pye. The mantelpieces were constructed of a variety of Queensland timbers (maple, cedar, black bean and silky oak) representing the state's timber resources. Allegorical stained glass highlighted the rural nature of the Queensland economy.

From 1901, the Queensland National Art Gallery occupied a purpose-designed room the length of the third floor above George Street. In 1930 the art gallery was relocated to the Exhibition Building Concert Hall .

The Lands Administration Building is a four-storeyed government office building occupying a site bounded by George Street, Stephens Lane, William Street and Queens Gardens. The form and scale of the building complement the Treasury Building and the Old State Library located nearby. It forms the southeastern edge of the important group of government buildings surrounding Queens Gardens, which also includes the Family Services Building and the William Street retaining wall.

The building is constructed of masonry, steel and concrete and faced with sandstone from Helidon and Warwick. It sits on a plinth faced with alternate courses of Enoggera and Mount Crosby granite. The principal elevation to Queens Gardens and the elevations to George and William Streets have banded rustication on the lower two storeys. This two-storeyed base supports a colonnade of Giant order Ionic columns.

The design of the facades is in the style of the Edwardian Baroque. At each corner and in the centre of the principal elevation, pavilions jut out terminating the colonnade. The pavilions are enriched with rusticated columns and pilasters. The central pavilion addressing Queens Park is surmounted by an open segmental pediment. This pediment supports an allegorical sculpture depicting agriculture and mining.

The building has an entrance in the centre of both the George Street and William Street elevations. Each entrance is marked with a broken segmental pediment. Behind the upper colonnades there is a long recessed balcony. The use of fine wrought iron detail to balustrades, railings and gates complements the masonry detail.

The stained glass in the entrance vestibules and elsewhere in the interior complements the use of sculpture externally. Depicted in stained glass in the William Street vestibule is a sower, a reaper, a pioneer and squatter. The glass in the George Street vestibule depicts a tiller and a herdsman. A marble tablet set into the wall of this entrance is inscribed with the message sent by King George V to the people of Australia on 25 April 1916, establishing the Anzac Day tradition. An honour board commemorating Lands Department staff who served in the First World War is located in the corridor on the first floor.

The basic form of the building echoes the layout of the Treasury building. It is a perimeter block building around a central courtyard. A wide hallway runs around most of the building with doorways on either side opening onto rooms that are lit via windows to the courtyard or to the street or garden. The hallway does not continue through the centre of that part of the building located on Stephens Lane. Rooms in this wing are accessed from an arcade on the northeastern edge of the courtyard. Cast-iron balconies also provide circulation around the courtyard. Vertical circulation is provided by fine staircases and lifts associated with the two street entrances. The design also echoes the Treasury building by providing colonnades on the three main elevations.

The construction demonstrates an early use of reinforced concrete floors in a large scale building. Steel framing was employed in the roofs over the photographic rooms on the top floor and over the fireproofed sections. Metal roller shutters were installed in the fireproof sections.

The principal architectural spaces include rooms formerly used for the Executive Council Chamber, the Land Court, and offices of the Premier and the Minister of Lands, which have a private stairway to George Street. These rooms have ornamental coffered plaster ceilings and timber panelling to dado height. The former Executive Council Chamber has three stained glass windows positioned above the dado which can also be seen from the hallway.

The building is very intact, internally and externally.

Land Administration Building was listed on the Queensland Heritage Register on 21 October 1992 having satisfied the following criteria.

As the most important building constructed by the Queensland government during the economic recovery of the early 1900s, the Lands Administration Building is important in demonstrating the pattern of Queensland's history.

The highly intact Lands Administration Building is important in demonstrating the principal characteristics of Edwardian Baroque public architecture, and is the finest example of its type constructed in Queensland.

The building is important in exhibiting particular aesthetic characteristics valued by the community, and by architectural historians in particular, the accomplished design, detailing, materials and workmanship, its townscape contribution, particularly in relation to the adjacent buildings and sites and the aesthetic quality and connotations of the associated artworks and furnishings, including the stained glass and sculptural work.

The Lands Administration Building has a strong and special association with the role and prestige of government, being an integral member of the most prominent, important and cohesive group of government buildings in Queensland.

The Lands Administration Building has a strong and special association with the role and prestige of government, being an integral member of the most prominent, important and cohesive group of government buildings in Queensland.

The building has a special association with Queensland Executive government for nearly seven decade and with important Queensland architect Thomas Pye, being one of his major works.

All content from Kiddle encyclopedia articles (including the article images and facts) can be freely used under Attribution-ShareAlike license, unless stated otherwise. Cite this article:
Land Administration Building Facts for Kids. Kiddle Encyclopedia.