Kids Encyclopedia Facts
(Redirected from Las Colinas)
This page is about the planned community development in Irving, Texas. For the mountain range in California, see Las Colinas (California).

Las Colinas is a mixed-use planned community development in Irving, Texas, part of the Dallas/Fort Worth Metroplex, governed by The Las Colinas Association, a Texas non-profit corporation. Due to its central location between Dallas and Fort Worth and its proximity to Dallas/Fort Worth International Airport and Dallas Love Field airport, Las Colinas has been a focus of corporate and business relocation. It has many corporate office and retail spaces, luxury hotels, townhomes, single-family homes, private country clubs, gated enclaves, urban lofts, parks, landscaped water courses, and its own light-rail transit system.

Originally called El Ranchito de Las Colinas ("the Little Ranch of the Hills"), Las Colinas was developed in 1972 by cattle ranching millionaire Ben H. Carpenter. It was one of the first planned communities in the United States and was once the largest mixed-use development in the South, with a land area of more than 12,000 acres (49 km2). Urban planners were consulted to lay out the entire town, an undertaking that predated later projects in Plano, Allen, and other Dallas suburbs.

During the 1980s building boom, Las Colinas became a popular location for relocating companies and office developers, attracting many corporations, including the global headquarters of four Fortune 500 companies and offices of more than 30 others, such as ExxonMobil, GTE Telephone (now Verizon), Kimberly-Clark and Associates Corp. 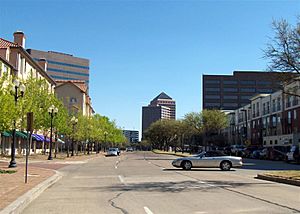 With 25,000,000 sq ft (2,300,000 m2) of office space, nearly equivalent to the Dallas CBD, Las Colinas is home to more than 2,000 companies, including the Fortune 500 global headquarters for Commercial Metals, ExxonMobil, Fluor and Kimberly-Clark. Other companies with headquarters in Las Colinas include Mission Foods, Trend Micro and La Quinta Inns and Suites. In 1999. La Quinta announced it would move its headquarters from San Antonio, stating it wanted to be near Dallas/Fort Worth International Airport. It is also the home to The Kidd Kraddick Morning Show and ESPN Dallas. FOX News also tapes from the FOX News Texas Studios in Las Colinas.

Las Colinas also features three private country clubs, including the Las Colinas Country Club owned by ClubCorp, Hackberry Creek Country Club and four championship golf courses surrounded by gated communities. The TPC Four Seasons Las Colinas Resort has hosted the HP Byron Nelson Championship of PGA Tour since it opened in 1986. It features tree-lined fairways, large greens and a number of creeks and ponds. However, as the Four Seasons works to develop a high rise in Uptown, it will cease operations at the course, and the TPC will come under new hotel and course management by the end of 2022.

It also contains high-rise office towers, retail centers, upscale residences, apartment complexes, and leisure facilities. Notable attractions include the Mustangs at Las Colinas sculpture and fountain and Las Colinas Flower Clock. The Mustangs of Las Colinas are featured in the courtyard of the Towers at Williams Square, where another ClubCorp Property, La Cima Club, is located. The complex also features a River Walk-styled canal offering gondola cruises, as well as the above-ground Las Colinas APT System. Las Colinas has over 22,300,000 square feet (2,072,000 m2) of office space, 1,300,000 square feet (121,000 m2) of retail, and 3,400 single-family homes. A 40-acre (160,000 m2) tract in Las Colinas is also home to the Irving Convention Center at Las Colinas.

Local schools include Irving Independent School District, Carrollton-Farmers Branch Independent School District, and The Highlands School, a private Catholic PreK through 12 school. North Hills Preparatory, an Uplift Education charter school is in Las Colinas. North Hills Preparatory is an International Baccalaureate school and has been ranked as a top 20 school in America by Newsweek.

In January 2022, ExxonMobil stated that it was consolidating and restructuring certain elements of its business, the most prominent being the consolidation of its chemical and refinery sectors. ExxonMobil additionally formalized the creation of a new low-carbon sector, which will handle the company's biofuel and carbon capture ventures. Concurrently, the company announced it would be closing its headquarters in Las Colinas, and moving to its recently-opened campus in the Houston suburb of Spring. The company released its 2021 Q4 Earnings early the next day on February 1, recording a 3-month profit of $8.9 Billion USD, jumping over 80%. ExxonMobil that day additionally announced that both its total debt was now around pre-pandemic levels, and it would begin buying back some of its shares.

Las Colinas, as part of Irving and the greater DFW metroplex, is considered to be part of the humid subtropical (cfa) classification according to the Köppen system of climate classification. This means that the summers are very warm and humid with mild winters and variable rainfall year round.

Some portions are within the Irving Independent School District.

The Highlands School is a private Catholic Pre-K through 12 college prep school in Las Colinas.

C-FBISD has always served a portion of Irving, and historically children were bussed to schools in Carrollton and Farmers Branch. Las Colinas, which opened in 1986, was C-FBISD's first school in Irving. The Kinwest Corporation donated the tract of land that houses the school. La Villita was C-FBISD's sixth school in Irving and its 27th elementary school. 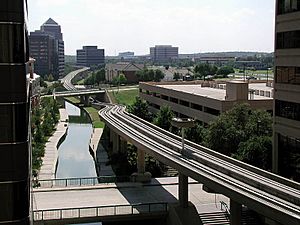 All content from Kiddle encyclopedia articles (including the article images and facts) can be freely used under Attribution-ShareAlike license, unless stated otherwise. Cite this article:
Las Colinas, Irving, Texas Facts for Kids. Kiddle Encyclopedia.