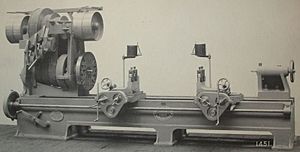 A lathe is a type of machine used mostly to create parts for things in areas such as woodturning, metalworking, metal spinning, spin welding and glassworking. A lathe works by holding an object in place while it is being rotated on an axle. A worker would then create something while it is held in place.

Woodworking lathes are the oldest variety. All other varieties are descended from these simple lathes. An adjustable horizontal metal rail – the tool rest – between the material and the operator accommodates the positioning of shaping tools, which are usually hand-held. After shaping, it is common practice to press and slide sandpaper against the still-spinning object to smooth the surface made with the metal shaping tools. The tool rest is usually removed during sanding, as it may be unsafe to have the operators hands between it and the spinning wood.

Many woodworking lathes can also be used for making bowls and plates. The bowl or plate needs only to be held at the bottom by one side of the lathe. It is usually attached to a metal face plate attached to the spindle. With many lathes, this operation happens on the left side of the headstock, where are no rails and therefore more clearance. In this configuration, the piece can be shaped inside and out. A specific curved tool rest may be used to support tools while shaping the inside. Further detail can be found on the woodturning page.

Most woodworking lathes are designed to be operated at a speed of between 200 and 1,400 revolutions per minute, with slightly over 1,000 rpm considered optimal for most such work, and with larger workpieces requiring lower speeds. 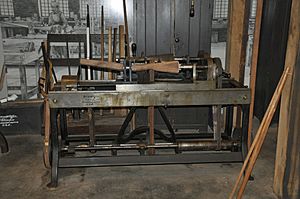 One type of specialized lathe is duplicating or copying lathe also known as Blanchard lathe after its inventor Thomas Blanchard. This type of lathe was able to create shapes identical to a standard pattern and it revolutionized the process of gun stock making in 1820's when it was invented. 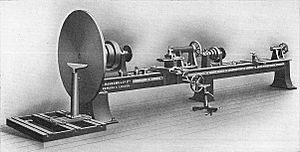 Used to make a pattern for foundries, often from wood, but also plastics. A patternmaker's lathe looks like a heavy wood lathe, often with a turret and either a leadscrew or a rack and pinion to manually position the turret. The turret is used to accurately cut straight lines. They often have a provision to turn very large parts on the other end of the headstock, using a free-standing toolrest. Another way of turning large parts is a sliding bed, which can slide away from the headstock and thus open up a gap in front of the headstock for large parts. 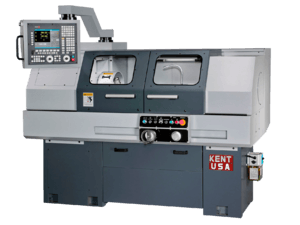 In a metalworking lathe, metal is removed from the workpiece using a hardened cutting tool, which is usually fixed to a solid moveable mounting, either a tool-post or a turret, which is then moved against the workpiece using handwheels and/or computer-controlled motors. These cutting tools come in a wide range of sizes and shapes, depending upon their application. Some common styles are diamond, round, square and triangular.

The tool-post is operated by lead-screws that can accurately position the tool in a variety of planes. The tool-post may be driven manually or automatically to produce the roughing and finishing cuts required to turn the workpiece to the desired shape and dimensions, or for cutting threads, worm gears, etc. Cutting fluid may also be pumped to the cutting site to provide cooling, lubrication and clearing of swarf from the workpiece. Some lathes may be operated under control of a computer for mass production of parts (see "Computer numerical control").

Manually controlled metalworking lathes are commonly provided with a variable-ratio gear-train to drive the main lead-screw. This enables different thread pitches to be cut. On some older lathes or more affordable new lathes, the gear trains are changed by swapping gears with various numbers of teeth onto or off of the shafts, while more modern or expensive manually controlled lathes have a quick-change box to provide commonly used ratios by the operation of a lever. CNC lathes use computers and servomechanisms to regulate the rates of movement.

On manually controlled lathes, the thread pitches that can be cut are, in some ways, determined by the pitch of the lead-screw: A lathe with a metric lead-screw will readily cut metric threads (including BA), while one with an imperial lead-screw will readily cut imperial-unit-based threads such as BSW or UTS (UNF, UNC). This limitation is not insurmountable, because a 127-tooth gear, called a transposing gear, is used to translate between metric and inch thread pitches. However, this is optional equipment that many lathe owners do not own. It is also a larger change-wheel than the others, and on some lathes may be larger than the change-wheel mounting banjo is capable of mounting.

The workpiece may be supported between a pair of points called centres, or it may be bolted to a faceplate or held in a chuck. A chuck has movable jaws that can grip the workpiece securely.

There are some effects on material properties when using a metalworking lathe. There are few chemical or physical effects, but there are many mechanical effects, which include residual stress, micro-cracks, work-hardening, and tempering in hardened materials. For details of many metal and woodworking lathes see the extensive Archive at: http://www.lathes.co.uk/page21.html

Cue lathes function similarly to turning and spinning lathes, allowing a perfectly radially-symmetrical cut for billiard cues. They can also be used to refinish cues that have been worn over the years.

Glass-working lathes are similar in design to other lathes, but differ markedly in how the workpiece is modified. Glass-working lathes slowly rotate a hollow glass vessel over a fixed- or variable-temperature flame. The source of the flame may be either hand-held or mounted to a banjo/cross-slide that can be moved along the lathe bed. The flame serves to soften the glass being worked, so that the glass in a specific area of the workpiece becomes ductile and subject to forming either by inflation ("glassblowing") or by deformation with a heat-resistant tool. Such lathes usually have two head-stocks with chucks holding the work, arranged so that they both rotate together in unison. Air can be introduced through the headstock chuck spindle for glassblowing. The tools to deform the glass and tubes to blow (inflate) the glass are usually handheld.

In diamond turning, a computer-controlled lathe with a diamond-tipped tool is used to make precision optical surfaces in glass or other optical materials. Unlike conventional optical grinding, complex aspheric surfaces can be machined easily. Instead of the dovetailed ways used on the tool slide of a metal-turning lathe, the ways typically float on air bearings, and the position of the tool is measured by optical interferometry to achieve the necessary standard of precision for optical work. The finished work piece usually requires a small amount of subsequent polishing by conventional techniques to achieve a finished surface suitably smooth for use in a lens, but the rough grinding time is significantly reduced for complex lenses. 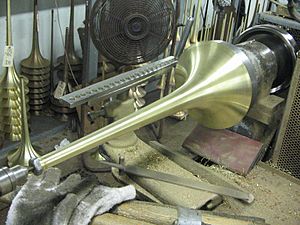 Trombone on a lathe

In metal spinning, a disk of sheet metal is held perpendicularly to the main axis of the lathe, and tools with polished tips (spoons) or roller tips are hand-held, but levered by hand against fixed posts, to develop pressure that deforms the spinning sheet of metal.

Metal-spinning lathes are almost as simple as wood-turning lathes. Typically, metal spinning requires a mandrel, usually made from wood, which serves as the template onto which the workpiece is formed (asymmetric shapes can be made, but it is a very advanced technique). For example, to make a sheet metal bowl, a solid block of wood in the shape of the bowl is required; similarly, to make a vase, a solid template of the vase is required.

Given the advent of high-speed, high-pressure, industrial die forming, metal spinning is less common now than it once was, but still a valuable technique for producing one-off prototypes or small batches, where die forming would be uneconomical.

The ornamental turning lathe was developed around the same time as the industrial screw-cutting lathe in the nineteenth century. It was used not for making practical objects, but for decorative work – ornamental turning. By using accessories such as the horizontal and vertical cutting frames, eccentric chuck and elliptical chuck, solids of extraordinary complexity may be produced by various generative procedures.

A special-purpose lathe, the Rose engine lathe, is also used for ornamental turning, in particular for engine turning, typically in precious metals, for example to decorate pocket-watch cases. As well as a wide range of accessories, these lathes usually have complex dividing arrangements to allow the exact rotation of the mandrel. Cutting is usually carried out by rotating cutters, rather than directly by the rotation of the work itself. Because of the difficulty of polishing such work, the materials turned, such as wood or ivory, are usually quite soft, and the cutter has to be exceptionally sharp. The finest ornamental lathes are generally considered to be those made by Holtzapffel around the turn of the 19th century.

Many types of lathes can be equipped with accessory components to allow them to reproduce an item: the original item is mounted on one spindle, the blank is mounted on another, and as both turn in synchronized manner, one end of an arm "reads" the original and the other end of the arm "carves" the duplicate.

A reduction lathe is a specialized lathe that is designed with this feature and incorporates a mechanism similar to a pantograph, so that when the "reading" end of the arm reads a detail that measures one inch (for example), the cutting end of the arm creates an analogous detail that is (for example) one quarter of an inch (a 4:1 reduction, although given appropriate machinery and appropriate settings, any reduction ratio is possible). 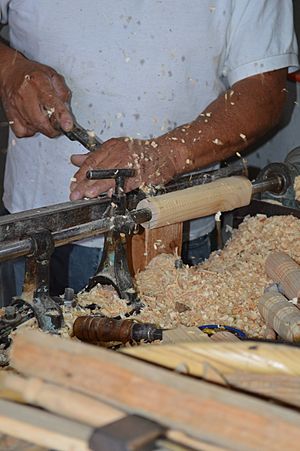 Craftsman Gregorio Vara working a chair leg on a lathe in Tenancingo, State of Mexico

A lathe in which softwood, like spruce or pine, or hardwood, like birch, logs are turned against a very sharp blade and peeled off in one continuous or semi-continuous roll. Invented by Immanuel Nobel (father of the more famous Alfred Nobel). The first such lathes in the United States were set up in the mid-19th century. The product is called wood veneer and it is used for making plywood and as a cosmetic surface veneer on some grades of chipboard. 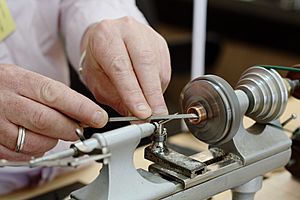 Watchmakers lathes are delicate but precise metalworking lathes, usually without provision for screwcutting, and are still used by horologists for work such as the turning of balance staffs. A handheld tool called a graver is often used in preference to a slide-mounted tool. The original watchmaker's turns was a simple dead-center lathe with a moveable rest and two loose head-stocks. The workpiece would be rotated by a bow, typically of horsehair, wrapped around it. For further details of makers, function and accessories see: http://www.lathes.co.uk/watchmaker

Transcription or recording lathes are used to make grooves on a surface for recording sounds. These were used in creating sound grooves on wax cylinders and then on flat recording discs. Originally the cutting lathes were driven by sound vibrations through a horn and then later driven by electric current, when microphones were used in recording. Many of these were professional models, but there were some used for home recording and were popular before the advent of home tape recording.

Examples of work produced from a lathe

All content from Kiddle encyclopedia articles (including the article images and facts) can be freely used under Attribution-ShareAlike license, unless stated otherwise. Cite this article:
Lathe Facts for Kids. Kiddle Encyclopedia.