Leadore is an incorporated small town in Lemhi County, Idaho, United States. The population was 105 at the 2010 census. 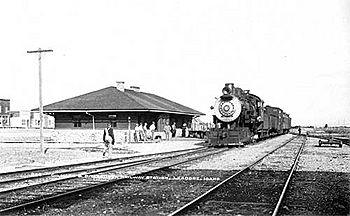 A train of the Gilmore & Pittsburgh Railroad pauses at the railway's depot in Leodore, August 1912.

The town of Leadore dates from 1910, when the Gilmore and Pittsburgh Railroad was constructed from Armstead, Montana over Bannock Pass and into the Lemhi Valley. This occurred because the original location for the train station in the town of Junction had to be altered when the owner of the land refused to sell. The town was home to the railroad's repair shops, and was the point where the railroad's branch line to Gilmore connected with the main line. Though the railroad ceased operating in 1939, Leadore has remained the largest town in the immediate area.

In 2001 a replica of the town's old railway station was constructed in Leadore. The new building serves as the town's community center.

According to the United States Census Bureau, the city has a total area of 0.31 square miles (0.80 km2), all of it land.

Leadore has a steppe climate (BSk) according to the Köppen climate classification system.

There were 48 households, of which 29.2% had children under the age of 18 living with them, 41.7% were married couples living together, 2.1% had a female householder with no husband present, 6.3% had a male householder with no wife present, and 50.0% were non-families. 50.0% of all households were made up of individuals, and 31.3% had someone living alone who was 65 years of age or older. The average household size was 2.19 and the average family size was 3.38.

All content from Kiddle encyclopedia articles (including the article images and facts) can be freely used under Attribution-ShareAlike license, unless stated otherwise. Cite this article:
Leadore, Idaho Facts for Kids. Kiddle Encyclopedia.