The Leverian collection was a natural history and ethnographic collection assembled by Ashton Lever. It was noted in particular for the content it acquired from the voyages of Captain James Cook. For three decades it was on display in London, being broken up by auction in 1806.

The first public location of the collection was the Holophusikon, also known as the Leverian Museum, at Leicester House, on Leicester Square, from 1775 to 1786. After it passed from Lever's ownership, it was displayed for nearly twenty years more at the purpose-built Blackfriars Rotunda just across the Thames.

Lever collected fossils, shells, and animals (birds, insects, reptiles, fish, monkeys) for many years, accumulating a large collection at his home at Alkrington, near Manchester. He was swamped with visitors, whom he allowed to view his collection for free, so much so that he had to insist that visitors that arrived on foot would not be admitted. He decided to exhibit the collection in London as a commercial venture, charging an entrance fee. 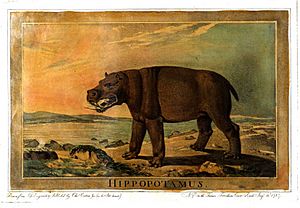 Aquatint of exhibit of a stuffed hippopotamus from Charles Catton's Animals

Lever acquired a lease of Leicester House in 1774, converting the principal rooms on the first floor into a single large gallery running the length of the house, and opened his museum in February 1775, with around 25,000 exhibits (a small fraction of his collection) valued at over £40,000. The display included many natural and ethnographic items gathered by Captain James Cook on his voyages. The museum took its name from its supposedly universal coverage of natural history, and was essentially a huge cabinet of curiosities.

Lever charged an entry fee of 5s. 3d., or two guineas for an annual ticket, and the museum had a degree of commercial success; the receipts in 1782 were £2,253. In an effort to draw in the crowds, Lever later reduced the entrance fee to half a crown (2s. 6d.) and was constantly looking for new exhibits. He also set out his exhibits to impress the visitor, as well as (unusually) including educational information. However, he spent more on new exhibits than he raised in entrance fees.

One admirer of the museum was Philip Bury Duncan as a boy: he went on to become keeper of the Ashmolean Museum. Among the objects displayed was the large Viking silver thistle brooch from the Penrith Hoard, discovered by a boy in Cumbria in 1785. In 1787, a print of it was published, claiming that it was the insignia of the Knights Templar. It was bought by the British Museum in 1909 (M&ME 1909,6-24,2).

Lottery for the collection

The British Museum and Catherine II of Russia both refused to buy the collection, so Lever obtained an Act of Parliament in 1784 to sell the whole by lottery. He only sold 8,000 tickets at a guinea each - he had hoped to sell 36,000.

The collection was acquired by James Parkinson, a land agent and accountant. It continued to be displayed at Leicester House until Lever's death in 1788, at a reduced entrance fee of one shilling.

Move south of the Thames

Parkinson transferred the Leverian collection to a purpose-built Rotunda building, at what would later be No. 3 Blackfriars Road. Leicester House itself was demolished in 1791. 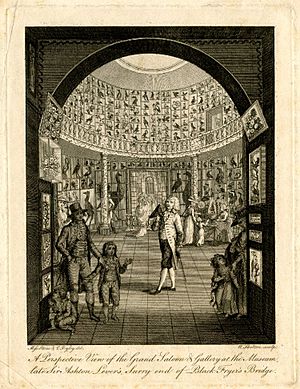 A catalogue and guide was printed in 1790. Parkinson also had George Shaw write an illustrated scientific work; the artists involved included Philip Reinagle, Charles Reuben Ryley, William Skelton, Sarah Stone, and Sydenham Edwards. Some of John White's specimens were put on public display there for the first time. The museum also served as a resource and opportunity for women: Ellenor Fenn wrote A Short History of Insects (1796/7), for which the long title concludes as "a pocket companion to those who visit the Leverian Museum", and a similar volume on quadrupeds; the artist Sarah Stone continued to work for Parkinson, as she had done for Lever.

Parkinson had some success in getting naturalists to attend the museum, which was easier at the time to visit than the British Museum. A visitor in 1799, Heinrich Friedrich Link, was complimentary.

Disposal of the collection

Parkinson also tried to sell the contents at various times. One attempt, a proposed purchase by the government, was wrecked by the adverse opinion of Sir Joseph Banks. In the end, for financial reasons, Parkinson sold the collection in lots by auction in 1806. Among the buyers were Edward Donovan, Edward Stanley, 13th Earl of Derby, and William Bullock; many items went to other museums, including the Imperial Museum of Vienna.

The contents of the museum are well recorded, from a catalogue of the museum created in 1784, and the sale catalogue in 1806, with a contemporary series of watercolours of its contents by Sarah Stone. There are also sale catalogue annotations allowing, for example, the counting of 37 lots bought by Alexander Macleay. The Royal College of Surgeons bought 79 lots, and notes by William Clift survive. Purchases from the sale founded the collection of Richard Cuming. In all 7,879 lots were sold over 65 days.

The specimens purchased by Edward Stanley, 13th Earl of Derby were bequeathed to the people of Liverpool upon his death in 1851 and were part of the founding collection of what is now World Museum, National Museums Liverpool. Stanley bought approximately 117 mounted birds, representing some 96 species, at the auction in 1806. 82 specimens still survived in 1812, 74 in 1823, and at least 29 in 1850. Among the present collections of World Museum are 25 study skins (relaxed mounts) of 22 species recognized as having originated from the Leverian Sale. Nine are recognized as having been collected during the second voyage of James Cook and third voyage of James Cook.

South Island kōkako, adult, accession no. LIV D4047, Leverian lot no. 2698. This specimen is a syntype specimen of Glaucopis cinereus Gmelin, 1788 (Syst. Nat. 1, p. 363) and was first described as "Cinereous Wattle-bird" by Latham, 1781 (Gen. Syn. 1 (1), p. 364). It was collected during one of James Cook's voyages from Queen Charlotte Sound / Tōtaranui. This species is critically endangered and possibly extinct.

Chattering kingfisher, adult, accession no. LIV D2326, Leverian lot no. 5612. This specimen was collected during one of James Cook's voyages, but is of doubtful type significance.

Large-billed seed finch, adult, accession no. LIV D2005a, Leverian lot no. 47 (last day but one). 1106. This specimen is the holotype specimen of Loxia regulus Shaw, 1792 (Mus. Lev., p. 45), a forgery perpetrated by adding a fasle crest of red feathers to a large-billed seed finch specimen.

Several hundred specimens (the exact number being unknown) of birds are in the collection of the Natural History Museum, Vienna. This includes a specimen (number NMW 50.761) of the extinct Lord Howe Swamphen.

A number of ethnographic objects survive in the collections of the British Museum.

All content from Kiddle encyclopedia articles (including the article images and facts) can be freely used under Attribution-ShareAlike license, unless stated otherwise. Cite this article:
Leverian collection Facts for Kids. Kiddle Encyclopedia.