Linthicum is a census-designated place (CDP) and unincorporated community in Anne Arundel County, Maryland, United States. The population was 10,324 at the 2010 census. It is located directly north of Baltimore-Washington International Thurgood Marshall Airport (BWI).

Designated as "Linthicum Heights" and zip code 21090 by the US Postal Service, Linthicum has been traditionally divided into two distinct communities each with its own community association and identity. These two communities, split by the Baltimore Beltway in 1957, are Linthicum and North Linthicum (or, alternatively, Linthicum-Shipley and North Linthicum.) Both communities developed as a result of their locations adjacent to the Baltimore and Annapolis Short Line railroad which brought commuters to the original truck farming community.

As a developed community, Linthicum began with the 1908 founding of the "Linthicum Heights Company", though a "Linthicum" or "Linthicum's" station on the 1887 Annapolis and Baltimore Short Line railroad existed at least as early as 1889. The community's name was from the area's primary land-owning family since an 1801 purchase by Abner Linthicum.

The Linthicum Heights Historic District was listed on the National Register of Historic Places in 2006.

Two major highways run through the CDP. The Baltimore Beltway (Interstate 695) runs northwest-southeast through Linthicum and intersects with the Baltimore–Washington Parkway (Maryland Route 295), which runs northeast-southwest. By the parkway it is 6 miles (10 km) northeast to downtown Baltimore and 32 miles (51 km) southwest to Washington, D.C.

There were 2,877 households out of which 28.3% had children under the age of 18 living with them, 64.3% were married couples living together, 8.7% had a female householder with no husband present, and 23.3% were non-families. 19.5% of all households were made up of individuals and 10.5% had someone living alone who was 65 years of age or older. The average household size was 2.61 and the average family size was 2.98. 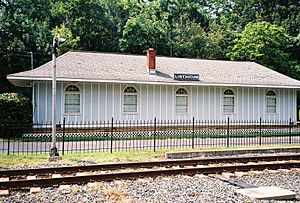 Linthicum is served by buses and three stops on the Baltimore Light Rail: 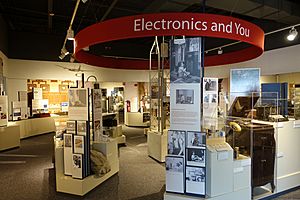 Interior of the National Electronics Museum

All content from Kiddle encyclopedia articles (including the article images and facts) can be freely used under Attribution-ShareAlike license, unless stated otherwise. Cite this article:
Linthicum, Maryland Facts for Kids. Kiddle Encyclopedia.