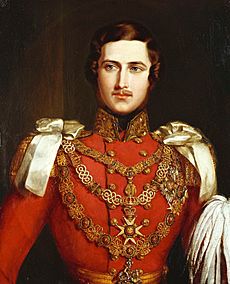 Prince Albert was the only male consort to be awarded the title of Prince Consort, compared to the usual custom of raising them to the peerage. 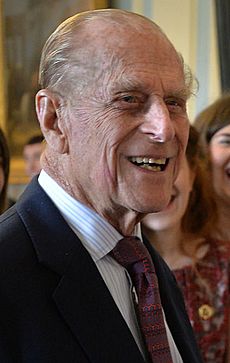 For the royal consorts of the predecessor realms of Scotland, England and Ireland, see List of Scottish consorts, List of English consorts and List of Irish consorts.

A royal consort is the spouse of a ruling King or Queen. Consorts of monarchs in the United Kingdom and its predecessors have no constitutional status or power but many had significant influence over their spouse. Some royal consorts, such as current consort Prince Philip, Duke of Edinburgh, have also helped to enhance the image of the Monarchy by becoming celebrities in their own right.

Since the foundation of the Kingdom of Great Britain in 1707, it and the United Kingdom of Great Britain and Ireland have had ten royal consorts. Queens between 1727 and 1814 were also Electress of Hanover, as their husbands all held the title of Elector of Hanover. Between 1814 and 1837, queens held the title as Queen of Hanover, as their husbands were Kings of Hanover. The personal union with the United Kingdom ended in 1837 on the accession of Queen Victoria because the succession laws (Salic Law) in Hanover prevented a female inheriting the title if there was any surviving male heir (in the United Kingdom, a male took precedence over only his own sisters, until the Succession to the Crown Act 2013 which removed male primogeniture). In the Austro-Prussian War of 1866, Hanover was annexed by Prussia and became the Province of Hanover.

Not all wives of monarchs have become consorts, as they may have died, been divorced, had their marriage declared invalid prior to their husbands' ascending the throne, or married after abdication. Such cases include:

An unusual case was that of Caroline of Brunswick, who had separated from her husband George IV prior to his accession, and although his consort in law, had no position at court and was forcibly barred from attending George IV's coronation and being crowned. This caused public outrage.

If Charles, Prince of Wales, ascends the throne, his second wife, Camilla, Duchess of Cornwall, will automatically take on the title and style pertaining to the queen consort unless legislation is passed to the contrary. It has been stated, however, that it is intended that she should be styled not as a queen consort, but as "princess consort".

All female consorts have had the right to be and have been styled as queens consort. However, of the three British male consorts to have existed since 1707, none was considered king consort:

Since 1707, only George I and Edward VIII have been unmarried throughout their reign.

House of Saxe-Coburg and Gotha, renamed House of Windsor in 1917

All content from Kiddle encyclopedia articles (including the article images and facts) can be freely used under Attribution-ShareAlike license, unless stated otherwise. Cite this article:
List of British consorts Facts for Kids. Kiddle Encyclopedia.