List of colonial governors of New York facts for kids 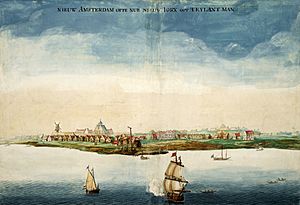 The territory which would later become the state of New York was settled by European colonists as part of the New Netherland colony (parts of present-day New York, New Jersey, Connecticut and Delaware) under the command of the Dutch West India Company in the Seventeenth Century. These colonists were largely of Dutch, Flemish, Walloon, and German stock, but the colony soon became a "melting pot." In 1664, at the onset of the Second Anglo-Dutch War, English forces under Richard Nicolls ousted the Dutch from control of New Netherland, and the territory became part of several different English colonies. Despite one brief year when the Dutch retook the colony (1673–1674), New York would remain an English possession until the American colonies declared independence in 1776. 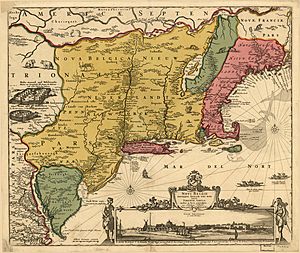 New Netherland (Dutch: Nieuw-Nederland) was the 17th-century colonial province of the Republic of the Seven United Netherlands and the Dutch West India Company. It claimed territories along the eastern coast of North America from the Delmarva Peninsula to southwestern Cape Cod. Settled areas of New Netherland are now constitute the states of New York, New Jersey, Delaware, and Connecticut, and parts of Pennsylvania and Rhode Island. The provincial capital New Amsterdam was located at the southern tip of the island of Manhattan at Upper New York Bay.

New Netherland was conceived as a private business venture to exploit the North American fur trade. By the 1650s, the colony experienced dramatic growth and became a major port for trade in the North Atlantic. The leader of the Dutch colony was known by the title Director or Director-General. On August 27, 1664, four English frigates commanded by Richard Nicolls sailed into New Amsterdam's harbor and demanded the surrender of New Netherland. This event sparked the Second Anglo-Dutch War, which led to the transfer of the territory to England per the Treaty of Breda.

Apart from a short period between May 1688 and April 1689, during which New York was part of the Dominion of New England, the territory was known in this period as the Province of New York.

All content from Kiddle encyclopedia articles (including the article images and facts) can be freely used under Attribution-ShareAlike license, unless stated otherwise. Cite this article:
List of colonial governors of New York Facts for Kids. Kiddle Encyclopedia.