List of living Medal of Honor recipients facts for kids 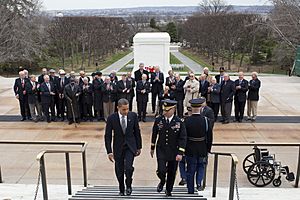 President Barack Obama meets with recipients at the National Medal of Honor Day ceremony at the Tomb of the Unknowns on March 25, 2009

Of the 79 living recipients 11 earned their Medals of Honor in World War II. 11 received them for actions in the Korean War. 54 were earned in the Vietnam War. Three were in the War in Afghanistan. Five earned their medal while serving in the U.S. Air Force. 51 were in the U.S. Army. 16 were in the U.S. Marine Corps. 7 were in the U.S. Navy. The oldest recipient is Robert D. Maxwell. He is 100. The youngest is Dakota Meyer. He is 32. Only one medal holder is still on active duty in the U.S. military. He is War in Afghanistan soldier Leroy Petry. Among the recipients is former U.S. Senator Bob Kerrey. Three are retired generals: Patrick Henry Brady and Robert F. Foley of the Army and James E. Livingston of the Marine Corps.

The Medal of Honor was created during the American Civil War and is the highest military decoration presented by the United States government to a member of its armed forces. The recipient must have distinguished themselves at the risk of their own life above and beyond the call of duty in action against an enemy of the United States. Due to the nature of this medal, it is commonly presented posthumously.

See also: List of Medal of Honor recipients for the Battle of Iwo Jima

During World War II, 464 United States military personnel received the Medal of Honor, 266 (57.3%) of them posthumously. A total of 42 Medals of Honor were presented for action in just two battles – Fifteen for actions during the Japanese attack on Pearl Harbor, and 27 for actions during the Battle of Iwo Jima. A total of 21 (4.5% of all World War II Medals of Honor) were received by members of the all-Japanese American 100th Infantry Battalion of the 442nd Regimental Combat Team, for actions in numerous battles across six different campaigns. Additionally, the only Medal of Honor ever presented to a member of the United States Coast Guard was received for actions during this war.

During the Korean War, 136 Medals of Honor were presented for bravery in action, 98 (72.1%) of them posthumously. As of 2018, five recipients were still living.

Main page: List of Medal of Honor recipients for the Vietnam War

The first person to earn the Medal of Honor in this war was Roger Donlon who, on 6 July 1964, rescued and administered first aid to several wounded soldiers and led a group against an enemy force.

The War in Afghanistan began on October 7, 2001 and was the beginning of the War on Terrorism. The war was launched by the United States, the United Kingdom, and NATO allies in response to the September 11, 2001 attacks. The stated purpose of the invasion was to capture Osama bin Laden, destroy al-Qaeda, and remove the Taliban regime which had provided support and safe harbor to al-Qaeda. Since 2001, 15 American service-members have received the Medal of Honor for actions in Afghanistan, three of them posthumously.

Recipients who died within the last twelve months are listed below.

All content from Kiddle encyclopedia articles (including the article images and facts) can be freely used under Attribution-ShareAlike license, unless stated otherwise. Cite this article:
List of living Medal of Honor recipients Facts for Kids. Kiddle Encyclopedia.