List of tallest buildings in Rhode Island facts for kids 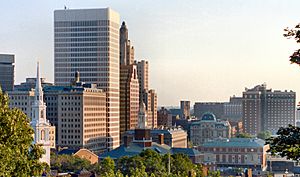 The skyline of Providence, as seen from the city's College Hill neighborhood

Providence, the capital of the U.S. state of Rhode Island and the third-largest city in New England, is home to 34 high-rises, twenty of which stand at least 175 feet (53 m) in height. The tallest skyscraper in the city is the Industrial National Bank Building at 111 Westminster Street, which rises 26 floors and 428 feet (130 m) in Downtown Providence. The Industrial National Bank Building, nicknamed the "Superman Building" due to its resemblance to the fictional Daily Planet building from the 1950s TV series, Adventures of Superman, is also the tallest building in Rhode Island and the sixth-tallest building in New England outside of Boston. The second-tallest building in Providence is One Financial Plaza, which rises 30 floors and 410 feet (125 m) and was completed in 1973.

As one of the early manufacturing centers in the United States, many of Providence's tallest buildings were constructed prior to 1930, including the Industrial National Bank Building and the Turk's Head Building, one of the city's earliest high-rises. The city went through a second building boom in the 1970s, during which time One Financial Plaza and Textron Tower, the city's fifth-tallest building, were completed. In the 1990s and 2000s, due to what has been dubbed the Providence "Renaissance", the city was the site of several notable high-rise construction projects; as of August 2012[update], there are still nine active high-rise proposals or construction projects taking place in the city. For the most part, the new projects have consisted of condominium and hotel developments, including The Residences at the Westin and the Waterplace Towers.

This lists ranks Providence high-rises that stand at least 175 feet (53 m) tall, based on standard height measurement. This includes spires and architectural details but does not include antenna masts. An equal sign (=) following a rank indicates the same height between two or more buildings. The "Year" column indicates the year in which a building was completed.

Tallest under construction or approved

This lists buildings that once held the title of tallest building in Providence.

A. The Biltmore Hotel is ranked including the height of the prominent "BILTMORE" sign on the top of the building. Such signs are often included in architectural heights, which is what this particular list ranks. However, some references do not include the sign in the total height of the building. Without the sign, the Biltmore stands at 205 feet (62 m), making it the 13th-tallest in Providence rather than the 10th-tallest.

All content from Kiddle encyclopedia articles (including the article images and facts) can be freely used under Attribution-ShareAlike license, unless stated otherwise. Cite this article:
List of tallest buildings in Rhode Island Facts for Kids. Kiddle Encyclopedia.