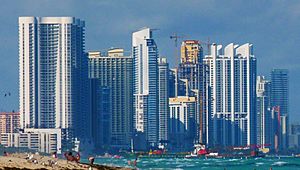 Skyline of Sunny Isles Beach from the south. 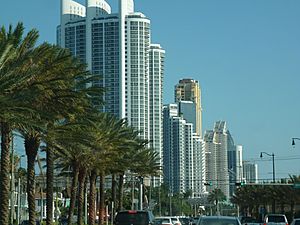 A portion of the skyline viewed from Collins Avenue southbound. 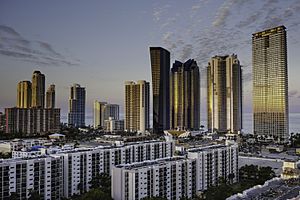 Skyline from the west in March 2018 showing Jade Signature, Jade Beach and Jade Ocean, and Muse.

This article lists the tallest buildings in the coastal city of Sunny Isles Beach, Florida, located in the northeast corner of Miami-Dade County. The ranking primarily relies on data from The Skyscraper Center, the public online database of skyscrapers by the Council on Tall Buildings and Urban Habitat. Supplementary data may be provided by Emporis, SkyscraperPage, or other third party news entities. Sunny Isles Beach had very few skyscrapers until the 2000s, when many were constructed on the east side of Collins Avenue, on the beach adjacent to the Atlantic Ocean. This strip historically consisted of a row of low rise hotels known as "Motel Row", mostly developed midcentury in the MiMo architectural style. Even among high-rises, the oldest such structures in the city only date to the 1960s. The wall of skyscrapers spans nearly the entire length of the city longitudinally, from the three Trump Towers located near the border of Haulover Park to the south to Regalia located adjacent to the border of Golden Beach to the north, which has strict single family residential zoning. All the skyscrapers in Sunny Isles Beach are residential and all of them are primarily concrete structurally. In general, the tallest height limit imposed by the Federal Aviation Administration (FAA) in Sunny Isles Beach is 649 ft (198 m) Above Mean Sea Level (AMSL), due to the proximity of Miami-Opa Locka Executive Airport to the west. Several proposed towers may rise to exactly this height, though the FAA reviews each building individually.

All skyscrapers in the city are located on the east side of Collins Avenue. Height given may be height above sea level (AMSL), which adds about 6 feet (2 m).

List includes known buildings over 450 feet (137 m), measured from the lowest pedestrian entrance to the architectural top, including spires but not radio masts and antennae. The year indicates the year the building was completed. An equals sign (=) indicates multiple buildings that share the same height. Floor counts rely on reported numbers and may not account for skipped floors such as the thirteenth floor. 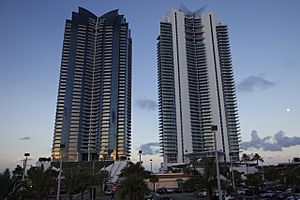 The discrepancy between the height measurement of Jade Beach and Jade Ocean may be explained by the fact that the entrance to Jade Ocean is elevated.

Includes buildings between the foundation work and topped-out phases. Topped-out buildings may be included in the main list. 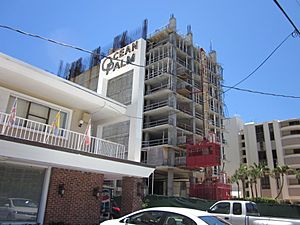 Shuttered Solis construction site from the Ocean Palm hotel. To the very right is Tropicana Condominium at 15645 Collins, which borders Haulover Park.

All content from Kiddle encyclopedia articles (including the article images and facts) can be freely used under Attribution-ShareAlike license, unless stated otherwise. Cite this article:
List of tallest buildings in Sunny Isles Beach Facts for Kids. Kiddle Encyclopedia.