Prior to the mid-1600s, the Matinecock lived in what is today considered Little Neck, sustained by the seafood in Little Neck Bay. In the 17th century, European settlers began arriving in the area for its conveniently located harbor. Soon after, the British and Dutch gained control of the Matinecock lands peacefully, except for a small area known as Madnan's Neck (possibly a shortened form of Indian name for the area, Menhaden-ock, or "place of fish"). Thomas Hicks, of the Hicks family that eventually founded Hicksville, and a band of armed settlers forcibly drove out the Matinecock in a battle at today's Northern Boulevard and Marathon Parkway. An old Matinecock cemetery remained in Little Neck on Northern Boulevard between Cornell Lane and Jesse Court. One of the last photographs of the cemetery (available online) was taken by the Daily News in August 1931, a few months before it was removed to make room for a widened Northern Boulevard. The remains from the cemetery were moved to the Zion Episcopal Church of Douglaston and placed under a stone marker that reads "Here rest the last of the Matinecoc."

The settlers thrived producing produce for the Manhattan market and the area was used as a dock on Little Neck Bay. As the population of Little Neck and New York in general began to grow, the Little Neck Long Island Rail Road station was opened in 1866 on the Port Washington Branch to serve the community and the dock area. Northern Boulevard was developed into a commercial and cultural hub, and the Little Neck Theater, a 576-seat movie theater, was opened in 1929 at the intersection of Northern Boulevard and Morgan Street. The theater was closed in 1983. 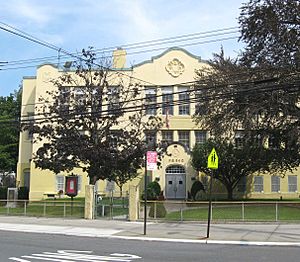 From the 1860s through the 1890s, small hard clams (quahogs) from Little Neck Bay were served in the best restaurants of New York and several European capitals. Eventually, the term "littleneck" or "littleneck clam" came to be used as a size category for all hard clams, regardless of origin.

All content from Kiddle encyclopedia articles (including the article images and facts) can be freely used under Attribution-ShareAlike license, unless stated otherwise. Cite this article:
Little Neck, Queens Facts for Kids. Kiddle Encyclopedia.