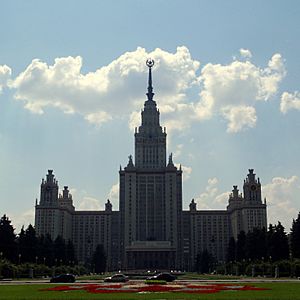 the main building of Moscow university

Lomonosov Moscow State University (MSU; Russian: Московский государственный университет имени М. В. Ломоносова) is the largest and oldest university in Russia. It was made in 1755 and is in Moscow. It was made by Ivan Shuvalov and Mikhail Lomonosov. It is named after Lomonosov.

The university building which can be seen in the picture, is an example of Stalinist architecture. In total, there are seven such towers around Moscow. The tower at the university is the largest one. The tower was designed by architect Lev Vladimirovich Rudnev. It was built after the war. He was awarded the Stalin Prize for its construction, in 1949. The building was the largest skyscraper outside New York for a long time. It was the tallest buildimg in Europe, until 1988. The central tower is 240m high. It has 36-stories. It is flanked by four huge wings of student and faculty accommodations. It is said to contain a total of 33 kilometers of corridors and 5,000 rooms. Facilities that are inside the building include a concert hall, a theatre, a museum, various administration services, a library, a swimming pool, a police station, a post office, a laundry, a hairdresser's salon, a canteen, bank offices, shops, cafeterias, and a bomb shelter. Along with the university administration, four of the main faculties - Faculty of Mechanics and Mathematics, the Faculty of Geology, the Faculty of Geography, and the Faculty of Fine and Performing Arts - now are in the Main building. The star on the top of the tower is large enough so that it has a small room and a viewing platform; it weighs 12 tons. The building's facades are decorated with giant clocks, barometers, and thermometers, statues, carved wheat sheaves, and Soviet crests (recently renovated). It stands before a terrace featuring statues of male and female students gazing optimistically and confidently into the future.

All content from Kiddle encyclopedia articles (including the article images and facts) can be freely used under Attribution-ShareAlike license, unless stated otherwise. Cite this article:
Moscow State University Facts for Kids. Kiddle Encyclopedia.