The long-nosed snake (Rhinocheilus lecontei ) is a species of nonvenomous snake in the family Colubridae. The species is endemic to North America. It has two recognized subspecies. The other species in the genus were previously considered subspecies.

The long-nosed snake is distinguished by a long, slightly upturned snout, which is the origin of its common name. It is tricolor, vaguely resembling a coral snake with black and red saddling that almost looks like banding, on a yellow or cream-colored background, which can look somewhat like yellow banding. Cream-colored spots within the black saddles are a distinct characteristic of the long-nosed snake. It differs from all other harmless snakes in the United States by having undivided subcaudal scales. They average around 30 inches (76 cm) in total length.

R. lecontei is a shy, nocturnal burrowing snake. It spends most of its time buried underground.

R. lecontei is oviparous, laying clutches of 4-9 eggs in the early summer, which hatch in the late summer or early fall.

The long-nosed snake is not apt to bite, but will release a foul smelling musk and blood from the cloaca as a defense mechanism if harassed. 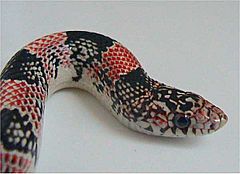 The long-nosed snake is not often found in the exotic pet trade as it frequently rejects rodent-based diets that are most readily available for captive snakes.

All content from Kiddle encyclopedia articles (including the article images and facts) can be freely used under Attribution-ShareAlike license, unless stated otherwise. Cite this article:
Long-nosed snake Facts for Kids. Kiddle Encyclopedia.