Louis de Rouvroy, duc de Saint-Simon, GE (16 January 1675 – 2 March 1755), was a French soldier, diplomat and memoirist. He was born in Paris at the Hôtel Selvois, 6 rue Taranne (demolished in 1876 to make way for the Blvd Saint-Germain). The family's ducal peerage (duché-pairie), granted in 1635 to his father Claude de Rouvroy (1608–1693), served as both perspective and theme in Saint-Simon's life and writings. He was the second and last Duke of Saint-Simon.

His enormous memoirs are a classic of French literature, giving the fullest and most lively account of the court at Versailles of Louis XIV and the Régence at the start of Louis XV's reign.

Men of the noblest blood (in Saint-Simon's view) might not be, and in most cases were not, peers in France. Derived at least traditionally and imaginatively from the douze pairs (twelve peers) of Charlemagne, the peerage of France was supposed to be, literally, the chosen of the noblesse, deemed thereafter to incarnate the French nobility par excellence. Their legal pre-eminence derived from hereditary membership in the Parlement of Paris, the highest of France's judicial and quasi-legislative assemblies. Strictly speaking, a French peerage (usually attached to a dukedom) was granted in favour of a designated fief rather than upon the titleholder per se. Had Saint-Simon succeeded in his lifelong ideal and ambition of conversion of France's peers into a Great Council of the Nation, history might have followed a different course.

The family's principal seat, where Saint-Simon's Mémoires were written, was at La Ferté-Vidame, bought by his father shortly after his elevation to the dukedom. The castle brought with it the ancient, entailed title, Vidame de Chartres, borne as a courtesy style by the Duke's only son until he was eighteen: As it had been attributed to an elderly character in the well-known court novel La Princesse de Clèves, published in 1678, just three years after Saint-Simon's birth, his arrival at court as a young man may have been less inconspicuous than otherwise. 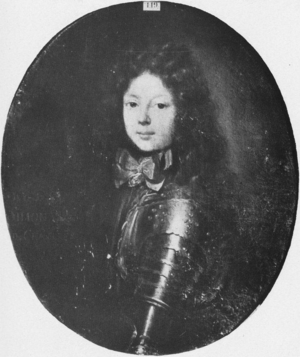 His father, Claude, the first duke, was a tall and taciturn man who was keen on hunting. Louis de Saint-Simon was the opposite; garrulous, much shorter, and preferring life indoors. His father had been a favorite hunting companion of Louis XIII. King Louis had appointed his father as Master of Wolfhounds before granting him a dukedom in 1635 at a relatively young age; he was 68 when Louis was born. Saint-Simon ranked thirteenth in the order of precedence among France's eighteen dukes.

His mother, Charlotte de L'Aubespine, daughter of François, marquis de Hauterive by his wife, Eléonore de Volvire, marquise de Ruffec, descended from a distinguished family, noble since at least the time of Francis I. She was a formidable woman whose word was law in the family, and became more so in extreme old age. Her son Louis, of whom Louis XIV and Queen Marie-Thérèse were godparents, was well-educated, largely by her. After further tuition from the Jesuits, he joined the Mousquetaires gris in 1692, serving at the Siege of Namur and at the Battle of Neerwinden. Then he embarked upon his life's mission by pronouncing upon the precedence among French peers, much against the orders and interests of François-Henri de Montmorency, duc de Luxembourg, his victorious general. In 1695 he married Marie-Gabrielle de Durfort, daughter of Guy Aldonce Durfort, Duke of Lorges, a marshal of France, later serving under the Duke's command. He seems to have regarded her with a respect and affection unusual between husband and wife in that era; and she sometimes succeeded in suppressing his pompous ideals.

As he did not receive further promotion in the army, he resigned his commission in 1702, thereby incurring Louis XIV's displeasure. He kept his position at court but only with difficulty, and then immersed himself in court intrigue at Versailles, tapping a collection of informants, the likes of dukes as well as servants, which later yielded him the benefit of an extraordinary amount of privileged information.

Saint-Simon, for his own part, appears to have played only an intermediate role in court life. He was nominated as ambassador to Rome in 1705, but the appointment was cancelled before he departed. At last he attached himself to Philippe II, Duke of Orléans, Louis XIV's nephew and the future regent. Though this was hardly likely to ingratiate him with Louis, it at least gave him the status of belonging to a definite party and it eventually placed him in the position of friend to the acting chief of state. He also allied himself with Louis, Duke of Burgundy, the Dauphin's son and next heir to the French throne.

Saint-Simon loathed Louis XIV's children, and not, apparently, entirely because they were accorded ceremonial precedence above France's peers. The Saint-Simon that is revealed through the Mémoires had many enemies, and a hatred reciprocated by many courtiers. However, it should be remembered that these reminiscences were written 30 years after the facts, by a disappointed man, and that Saint-Simon had maintained congenial or at least courteous relations with the majority of his fellow courtiers.

The death of Louis XIV seemed to have given Saint-Simon a chance of realizing his hopes. The Duke of Orleans became regent and Saint-Simon was appointed to his Regency Council. But no steps were taken to carry out his "preferred vision" of a France ruled by the noble élite, exposing how little real influence he had with the Regent. In 1721, he was appointed ambassador extraordinary to Spain so as to facilitate the marriage of Louis XV and Infanta Mariana Victoria of Spain (which, however, never took place). Whilst in Spain he did, however, secure a grandeeship (which later devolved upon his second son) and, despite having caught smallpox, he was quite satisfied with his efforts there: two ducal titles (grandees were recognised in France as dukes). Saint-Simon was not eager, unlike most other nobility, to acquire profitable functions, and he did not use his influence to repair his finances, which were even further diminished by the extravagance of his embassy.

After his return to France he had little to do with public affairs. His own account of the cessation of his intimacy with Orléans and Guillaume Dubois, the latter having never been his friend, is, like his account of some other events of his own life, rather vague and dubious. But there can be little doubt that he was eclipsed, and even expelled from the château de Meudon by Cardinal Dubois. He survived for more than thirty years; but little is known of the rest of his life. His wife died in 1743, his eldest son a little later; he had other family troubles, and he was loaded with debt; the dukedom in which he took such pride ended with him, and his only granddaughter was childless.

He died in Paris on 2 March 1755, having almost entirely outlived his own generation and exhausted his family's wealth, though not its notoriety: a distant relative, Claude Henri de Rouvroy, comte de Saint-Simon, born five years after the Duke's death, is remembered as an intellectual forerunner of socialism.

All his possessions, including his writings, were seized by the Crown on his death. His Mémoires were kept under sequestration and only circulated through private copies and excerpts until the restitution of the manuscript to his heirs in 1828. While its appendices and supporting documents were dispersed, this sequestration was ultimately credited for the preservation of his memoirs.

Fame as a writer

It can be said that the actual events of Saint-Simon's life, long as it was and exalted as was his position, are neither numerous nor noteworthy. Yet he posthumously acquired great literary fame. He was an indefatigable writer, and he began very early to record all the gossip he collected, all his interminable legal disputes over precedence, and a vast mass of unclassified material. Most of his manuscripts were retrieved by the Crown and it was long before their contents were fully published: partly in the form of notes in the marquis de Dangeau's Journal, partly in both original and independent memoirs, partly in scattered and multifarious extracts; he had committed to paper an immense amount of material.

Saint-Simon's Mémoires strike a most realistic note. On the one hand, he is petty, unjust to private enemies and to those who espoused public views contrary to his as well as being an incessant gossip. Yet he shows a great skill for narrative and for character-drawing; he has been compared to the historians Tacitus and Livy. He is not a writer who can be sampled easily, inasmuch as his most characteristic passages sometimes occur in the midst of long stretches of quite uninteresting diatribe. His vocabulary was extreme and inventive; he is deemed to have first used the word "intellectual" as a noun, and "patriot" and "publicity" are also accredited as being introduced by him in their current usage.

A few critical studies of him, especially those of Charles Augustin Sainte-Beuve, are the basis of much that has been written about him. His most famous passages, such as the account of the death of the Dauphin, or of the Bed of Justice where his enemy, Louis-Auguste de Bourbon, duc du Maine, was degraded, do not give a fair idea of his talent. These are his celebrated pieces, his great "engines", as French art slang calls them. Much more noteworthy as well as more frequent are the sudden touches which he gives. The bishops are "cuistres violets" (purple pedants); "(M. de Caumartin) porte sous son manteau toute la faculté que M. de Villeroy étale sur son baudrier" (Caumartin holds under his cloak all the power that Villeroy displays on his scabbard); another politician has a "mine de chat fâché" (appearance of a disgruntled cat). In short, the interest of his Mémoires is in the novel and adroit use of word and phrase.

He had a profound influence on writers including Tolstoy, Barbey d' Aurevilly, Flaubert, Valle-Inclán, Proust, Mujica Láinez, and many others.

His granddaughter Marie Christine, Mademoiselle de Ruffec (daughter of Jacques Louis) married a son of the Princess Louise Hippolyte of Monaco in 1749 becoming the "Countess of Valentinois".

All content from Kiddle encyclopedia articles (including the article images and facts) can be freely used under Attribution-ShareAlike license, unless stated otherwise. Cite this article:
Louis de Rouvroy, duc de Saint-Simon Facts for Kids. Kiddle Encyclopedia.