Luigi Palma di Cesnola (July 29, 1832 – November 20, 1904), an Italian-American soldier, diplomat and amateur archaeologist, was born in Rivarolo Canavese, near Turin. He received the Medal of Honor for his actions during the American Civil War. He was United States consul at Larnaca in Cyprus (1865–1877) and first Director of the Metropolitan Museum of Art in New York (1879–1904).

Luigi Palma di Cesnola was born the second son of a count and military officer at Rivarolo Canavese, Piedmont, in the Kingdom of Sardinia, Italy. His uncle was Italian patriot Alerino Palma, and his brother was Alessandro Palma di Cesnola.

In 1848 Luigi joined the Sardinian army at the age of 15, and served in the First Italian War of Independence. During the battle of Novara on 23 March 1849, he was decorated for bravery and promoted to the rank of second lieutenant. He graduated from the Royal Military Academy at Cherasco in 1851. In 1854 he was dismissed for unknown reasons, and subsequently served with the British Army in the Crimean War as the aide-de-camp to General Enrico Fardella.

In 1858 he went to New York, where he first taught Italian and French. In February 1861 he married Mary Isabel Reid, the daughter of war hero Commodore Samuel Chester Reid. He then founded a private military school for officers, where in six months he trained over seven hundred students. Since 1862, he took part in the American Civil War as colonel of the 4th New York Cavalry Regiment, serving under the name Louis P. di Cesnola. Accused of sending stolen property North, Cesnola was threatened with dishonorable dismissal from the army. However, at the Battle of Aldie (June 1863), Colonel di Cesnola was wounded and taken prisoner. He received a Medal of Honor for his efforts during the battle. He was released from Libby Prison early in 1864 when the Union Agent for Prisoner Exchange offered a personal friend of Jefferson Davis as barter. He served in the Wilderness and Petersburg campaigns (1864–65) as a commander of a cavalry brigade but was not promoted to brigadier general. Although he was nominated for appointment to the brevet grade of brigadier general to rank from March 13, 1865 after the end of the war, the U.S. Senate never confirmed his appointment (contrary to the inscription on his grave stone). 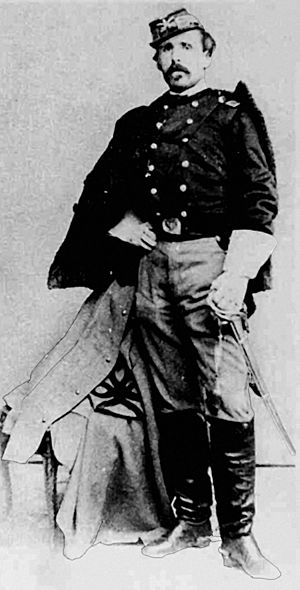 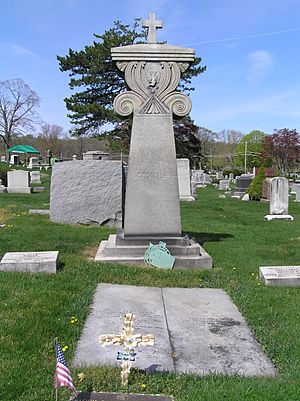 After the war, he was appointed United States consul at Larnaca in Cyprus (1865–1877). During his stay on Cyprus he carried out excavations (especially around the archaeological site of Kourion), which resulted in the discovery of a large number of antiquities. The Napried, one of the ships commissioned by di Cesnola to transport approximately 35,000 pieces of antiquities that he had collected from Cyprus, was lost at sea carrying about 5,000 pieces in its cargo. The collection was purchased by the newly expanded Metropolitan Museum of Art in New York in 1872, and Cesnola became the first director in 1879, until his death in 1904. Doubt having been thrown by the art critic Clarence Cook, and by Gaston L. Feuardent, in an article in the New York Herald (August 1880), upon the genuineness of his restorations, the matter was referred to a special committee, which pronounced in his favor. In Cyprus however, his actions are still considered to tantamount to looting. Researcher Ahmet Gazioğlu, citing excerpts from di Cesnola's own book, wrote that di Cesnola often excavated illegally using blackmail and that he was "a problem to the Turkish authorities, both because of his contempt for the law and his misbehaviour towards the officials and the people". 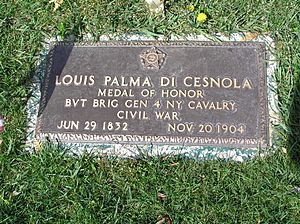 Cesnola was the author of Cyprus, its ancient Cities, Tombs and Temples (1877), a travel book of considerable service to the practical antiquary; and of a Descriptive Atlas of the Cesnola Collection of Cypriote Antiquities (3 volumes, 1884–1886). He received honorary degrees from Columbia and Princeton universities and a special knightly order from the king of Italy, and was a member of several learned societies in Europe and America.

He died in New York City on November 20, 1904. He was interred at Kensico Cemetery in Valhalla, NY. His funerals, on 23 November 1904 at St. Patrick's Cathedral (Manhattan), were attended by a crowd of more than 2000 dignitaries and mourners.

All content from Kiddle encyclopedia articles (including the article images and facts) can be freely used under Attribution-ShareAlike license, unless stated otherwise. Cite this article:
Luigi Palma di Cesnola Facts for Kids. Kiddle Encyclopedia.