Macaroni and cheese facts for kids 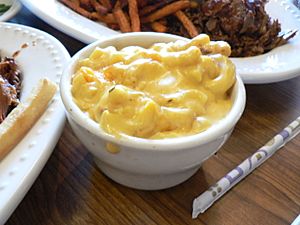 A dish of macaroni and cheese 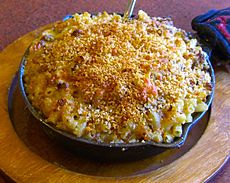 Baked macaroni and cheese with bread crumbs and pieces of ground beef.

Macaroni and cheese—also called mac and cheese in American, Canadian, and macaroni pie in Caribbean English; and macaroni cheese in the United Kingdom—is a dish of English origin, consisting of cooked macaroni pasta and a cheese sauce, most commonly cheddar. It can also incorporate other ingredients, such as breadcrumbs, meat and vegetables.

Traditional macaroni and cheese is a casserole baked in the oven; however, it may be prepared in a sauce pan on top of the stove or using a packaged mix. The cheese is often first incorporated into a Béchamel sauce to create a Mornay sauce, which is then added to the pasta. In the United States, it is considered a comfort food.

Pasta and cheese casseroles have been recorded as early as the 14th century in the Italian cookbook, Liber de Coquina, one of the oldest medieval cookbooks, which featured a dish of parmesan and pasta. A cheese and pasta casserole known as makerouns was recorded in the famous medieval English cookbook, the Forme of Cury, which was also written in the 14th century. It was made with fresh, hand-cut pasta which was sandwiched between a mixture of melted butter and cheese. The recipe given (in Middle English) was:

"Take and make a thynne foyle of dowh. and kerve it on peces, and cast hem on boillyng water & seeþ it wele. take chese and grate it and butter cast bynethen and above as losyns. and serue forth."

This is the above recipe in modern English:

"Make a thin foil of dough and cut it in pieces. Put them in boiling in water and seethe them well. Grate cheese and add it with butter beneath and above as with losyns [a dish similar to lasagne], and serve."

The first modern recipe for the dish was included in Elizabeth Raffald's 1770 book, The Experienced English Housekeeper. Raffald's recipe is for a Béchamel sauce with cheddar cheese—a Mornay sauce in French cooking—which is mixed with macaroni, sprinkled with Parmesan, and baked until bubbly and golden. Another recipe from 1784 stated that the small tubes of macaroni must be boiled, then drained in a sifter before being moved to a frying pan. Heavy cream is then added to the macaroni along with a "knob of butter" rolled in flour, and it must be cooked for five minutes before being transferred to a dish and topped with toasted Parmesan and pepper. The famous British Victorian cookbook Mrs Beeton's Book of Household Management included two recipes for the dish. One recipe states:

"The macaroni, (which should be "tender but perfectly firm, no part being allowed to melt, and the form entirely preserved" – lest one be tempted to cook it for so long it actually disintegrated) is then topped with more cheese, pepper and breadcrumbs, before receiving a final dose of melted butter for good measure and being placed before a "bright fire" to brown the crumbs, or grilled with a salamander broiler.

In the United Kingdom, during the 2010s, it has seen a surge in popularity, becoming widespread as a meal and as a side order in both fast food and upmarket restaurants.

The American president Thomas Jefferson and James Hemings, his chef and slave, encountered macaroni in Paris and brought the recipe back to Monticello. Jefferson drew a sketch of the pasta and wrote detailed notes on the extrusion process. In 1793, he commissioned American ambassador to Paris William Short to purchase a machine for making it. Evidently, the machine was not suitable, as Jefferson later imported both macaroni and Parmesan cheese for his use at Monticello. In 1802, Jefferson served "a pie called macaroni" at a state dinner. The menu of the dinner was reported by Reverend Manasseh Cutler, who apparently was not fond of the cheesy macaroni dish. Nevertheless, since that time, baked macaroni and cheese has remained popular in the United States. 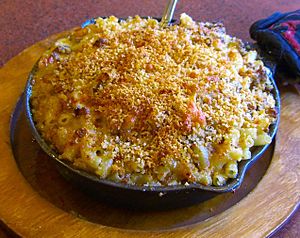 A recipe called "macaroni and cheese" appeared in the 1824 cookbook The Virginia Housewife written by Mary Randolph. Randolph's recipe had three ingredients: macaroni, cheese, and butter, layered together and baked in a hot oven. The cookbook was the most influential cookbook of the 19th century, according to culinary historian Karen Hess. Similar recipes for macaroni and cheese occur in the 1852 Hand-book of Useful Arts, and the 1861 Godey's Lady's Book. By the mid-1880s, cookbooks as far west as Kansas and Festus, Missouri, included recipes for macaroni and cheese casseroles. Factory production of the main ingredients made the dish affordable, and recipes made it accessible, but not notably popular. As it became accessible to a broader section of society, macaroni and cheese lost its upper class appeal.

Macaroni and cheese is very popular pasta for kids.

Macaroni and Cheese was brought to Canada by British immigrants, coming from other parts of the British Empire. Macaroni and cheese recipes have been attested in Canada since at least Modern Practical Cookery in 1845, which suggests a puff pastry lining (suggesting upper-class refinement); a sauce of cream, egg yolks, mace, and mustard; and grated Parmesan or Cheshire cheese on top. Canadian Cheddar cheese was also becoming popularized at this time and was likely also used during that era.

Macaroni and cheese is very popular in modern-day Canada. Kraft Dinner is the most popular brand of packaged macaroni and cheese. Sasha Chapman, writing in The Walrus, considered it to be Canada's national dish, ahead of poutine.

Pasta other than macaroni noodles are often used: most any short-cut extruded pasta and many of the decorative cut pasta will do, particularly those with folds and pockets to hold the cheese. The dish may still be referred to as "macaroni and cheese" when made with a different pasta; while "shells and cheese" is sometimes used when it is made with Conchiglie.

While Cheddar cheese is most commonly used for macaroni and cheese, other cheeses may also be used—usually sharp in flavor—and two or more cheeses can be combined. Popular recipes include using Gruyere, Gouda, Havarti, and Parmesan cheese.

Macaroni and cheese can be made by simply layering slices of cheese and pasta (often with butter and/or evaporated milk) then baking in a casserole, rather than preparing as a cheese sauce. Also, some like to include a crunchy topping to their baked macaroni and cheese by topping it off with bread crumbs or crushed crackers, which also keeps the noodles on top from drying out when baking. 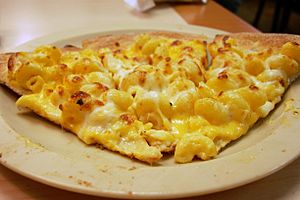 One novelty presentation is deep-fried macaroni and cheese found at fairs and food carts. In Scotland, the dish can often be found incorporated into a pastry shell, known as a macaroni pie. Macaroni and cheese pizza can be found on recipe web sites and US restaurant menus, such as Cici's Pizza.

A similar traditional dish in Switzerland is called Älplermagronen (Alpine herder's macaroni), which is also available in boxed versions. Älplermagronen are made of macaroni, cream, cheese, roasted onions, and in some recipes, potatoes. In the Canton of Uri, the potatoes are traditionally omitted, and in some regions, bacon or ham is added. The cheese is often Emmental cheese or Appenzeller cheese. It is usually accompanied by apple sauce. 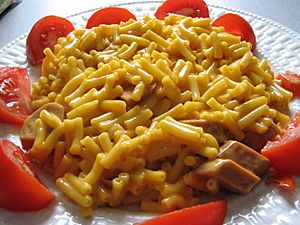 A plate of pre-packaged Kraft macaroni cheese, served with tomato and sausage

A variety of packaged mixes which are prepared in a sauce pan on the stove or in a microwave oven are available. They are usually modeled on Kraft Macaroni & Cheese (known as Kraft Dinner in Canada), which was introduced in 1937 with the slogan "make a meal for four in nine minutes." It was an immediate success in the US and Canada amidst the economic hardships of the Depression. During the Second World War, rationing led to increased popularity for the product which could be obtained two boxes for one food rationing stamp. The 1953 Better Homes and Gardens Cookbook includes a recipe for the dish with Velveeta, which had been reformulated in that year. The boxed Kraft product is immensely popular in Canada, where it is the most-purchased grocery item in the country.

Boxed mixes consist of uncooked pasta and either a liquid cheese sauce (often labeled "deluxe") or powdered ingredients to prepare it. The powdered cheese sauce is mixed with either milk or water, and margarine, butter, or olive oil and added to the cooked noodles. Some mixes prepared in a microwave cook the pasta in the sauce.

Another popular variant is jarred macaroni cheese sauce, which is especially popular in the UK and US, available under the Dolmio and Ragú brands, among others. The pasta is purchased and prepared separately, then mixed with the heated cheese sauce.

Powdered cheese sauce, very similar to what is found inside a box of macaroni and cheese mix, is also sold separately without the pasta. This product is produced by several companies, most notably Bisto, Cabot, and Kraft.

A number of different products on the market use this basic formulation with minor variations in ingredients.

All content from Kiddle encyclopedia articles (including the article images and facts) can be freely used under Attribution-ShareAlike license, unless stated otherwise. Cite this article:
Macaroni and cheese Facts for Kids. Kiddle Encyclopedia.